The Vancouver Asahi at VIFF 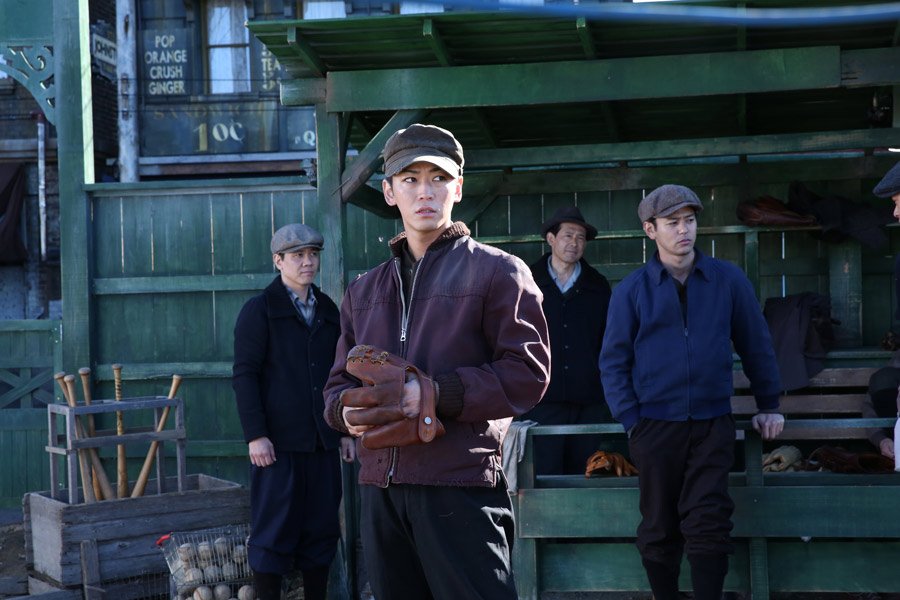 This past summer, even as protest tents were sprouting up across Vancouver’s Oppenheimer Park, post-production was wrapping up on a new fact-based film that features that same park in a starring role. The big-budget film, The Vancouver Asahi (Vancouver no Asahi), highlights the exploits of the Asahi baseball team that ruled the Pacific Northwest amateur leagues for a number of years. Based out of the Powell Street neighbourhood, the team won five straight championships between 1937 to 1941, beating bigger, stronger teams with a brand of baseball that came to be known as “brain ball.”

According to Grace Eiko Thomson, who served as one of the Canadian advisors on the film, the Japan-Canada coproduction takes a semi-fictional approach, focusing on the championship years when the team appeared unbeatable. The Vancouver Asahi features a number of fictional players including shortstop Reji (Satoshi Tsumabuki), a 2nd generation Japanese immigrant who works at a sawmill in Vancouver. The team’s ace pitcher is Roi (Kazuya Kamenashi), who works in a fishery. Kei (Ryo Katsuji), Reji’s co-worker, is the team’s 2nd baseman. Tom (Yusuke Kamiji) is the catcher and works at a tofu shop. Frank (Sosuke Ikematsu) works at a hotel.

Thomson, who curated Levelling the Playing Field: Legacy of Vancouver’s Asahi Baseball Team for the Nikkei National Museum, notes that Mr. Norio Goto, the author of the Japanese book Vancouver Asahi Monogatari (currently being translated into English), saw the film and enjoyed it, despite the fact that it plays somewhat loosely with the facts, a charge that is inevitably leveled against any film based on real events.

The Vancouver Asahi, which has its world premiere at the Vancouver International Film Festival on September 29, is directed by Ishii Yuya, whose films Bare-assed Japan and Mitsuko Delivers have previously screened at VIFF. Although some location work was done in Vancouver, most of the film was shot in Japan. Powell Street and Oppenheimer Park circa 1940s were faithfully recreated on a sound stage in Ashikaga, Tochigi Prefecture, Japan and the mainly nisei (second generation) baseball players are played by Japanese actors.

The story of the Asahi baseball team is a compelling one on many levels. While the dynasty-in-the making was stopped by the abrupt dispersal of the team (along with the rest of the Japanese Canadian community) following the bombing of Pearl Harbor, the legend and legacy of the Asahi continues to grow. In recent years, films and books have paid tribute to a team that fought racism and discrimination while winning fans across generations and races. The team was inducted into the Canadian Baseball Hall of Fame in 2003 and the BC Sports Hall of Fame in 2005. The team was designated an Event of National Historic Significance in 2008, with a plaque unveiled in Oppenheimer Park on September 18, 2011, the 70th anniversary of the Asahi’s last game.

The Vancouver Asahi (Vancouver no Asahi) will have its world premiere at a special gala presentation at VIFF.

October 9, 3:30pm, at the Centre for Performing Arts (added)

Situated as it is on the Pacific Rim, with a large and diverse Asian population, Vancouver is the perfect nexus between east and west when it comes to all things cultural.

Since 1985, the Vancouver International Film Festival has recognized Asia’s importance to the city with Dragons & Tigers, a festival within a festival that represents the largest annual exhibition of Pacific Asian films outside of Asia.

Programmed by Tony Rayns, a London-based East Asian film scholar and critic, and Shelly Kraicer, a respected Canadian scholar of Chinese cinema now living in Beijing, Dragons & Tigers regognizes the continued excellence in East Asian cinema, Vancouver’s key geographic situation, its unique ethnic mix, and the initiatives being taken at all government levels to enhance economic and cultural ties between Western Canada and the Pacific Rim.

With nearly sixty films, the 2014 iteration of Dragons & Tigers offers films for all tastes. The following list comprises the Japanese films featured at this year’s Festival.

Omori follows The Ravine of Goodbye with a delicious comedy-drama about the perfect odd couple:  Tada (Eita), who runs a shaky do-it-all service, and his buddy Gyoten (Matsuda Ryuhei), who usually gets in the way. The storyline involves phoney organic farming, pensioners, babysitting, yakuza and lesbian parenting. Two hours of sheer charm! –Tony Rayns

THE FURTHEST END AWAITS (Saihate nite)
Chiang Hsin-Chiung (Japan/Taiwan, 118 min) North American Premiere
Saturday, September 27, 2:00pm, Vancity Theatre
Made in Japan by a Taiwanese woman director, this sets a high benchmark for films about female solidarity. A woman returns to the remote peninsula where she grew up; she wants to “find” her father, lost at sea, but instead bonds with a single mother living nearby. Piercing emotional depth and wonderful performances, plus great visual beauty. – Tony Rayns

THE HORSES OF FUKUSHIMA (Matsuri no uma)
Matsubayashi Yoju (Japan, 74 min) Canadian Premier
Monday, September 29, 10:00am, Cinematheque
Wednesday, October 1, 9:30pm, Cinematheque
Much of Matsubayashi’s prize-winning documentary was shot inside the “exclusion zone” around the crippled nuclear power-plant at Fukushima. He finds a stable of horses injured in the tsunami, and follows their rehabilitation to take part in a local horse festival. Very movingly, we watch one horse overcome its traumas… and one man overcome his fears. –Tony Rayns
Filmmaker in Attendance

NIAGARA
Hayakawa Chie (Japan, 28 min)
Monday, September 29, 10:00am, Cinematheque
Wednesday, October 1, 9:30pm, Cinematheque
Trained in photography in New York, Hayakawa put her filmmaking career on hiatus ten years ago. This excellent “comeback” film centres on the moment that a young woman (who has grown up thinking she’s an orphan) learns for the first time to see… and to start living. – Tony Rayns

OW (Maru)
Suzuki Yohei (Japan, 89 min) International Premiere
Wednesday, October 1, 7:00pm, Cinematheque
Friday, October 3, 10:00am, Cinematheque
The mysterious sphere which appears in an ordinary suburban house seems to stop time and scramble the brains of the Suzuki family. Maybe it’s a cousin of 2001’s monolith? The police are too dopey to care much, but an intrepid reporter goes where angels fear to tread… A brilliantly original debut feature, scary and funny. The accompanying short’s great too! –Tony Rayns Best New Director Award Nominee.  Filmmaker in Attendance

SHARING
Shinozaki Makoto (Japan, 94 min) International Premiere
Tuesday, September 20, 2:30pm, Cinematheque
Wednesday, October 8, 9:00pm, Cinematheque
VIFF regular Shinozaki brings a touch of his enthusiasm for horror-fantasy movies to the tragic story of a teacher who has lost her fiancé in the 2011 tsunami. Her traumatizing loss meshes with her interest in precognitive dreams… and with the post-tsunami play developed by one of her students. Hirabayashi’s brilliant short also explores the aftershocks of the disaster. –Tony Rayns

THE TALE OF THE PRINCESS KAGUYA
(Kaguyahime no monogatari)
Takahata Isao (Japan, 137 min)
Saturday, September 27, 11:30am
Centre for Performing Arts
Princess Kaguya has the feel of a true Takahata film, from its unshrinking emotional fidelity to its sudden, exhilarating leaps into fantasy… There is a deep wisdom in this film, but a deep sadness too.  If it is Takahata’s farewell, it’s one that will have a long echo, just like his 1,000 year-old source – Mark Schilling, Japan Times

AMAZING ANIME
Various directors (Japan/South Korea, 86 min)
Saturday, September 27, 6:30pm, International Village #8
Sunday, September 28, 1:45pm, International Village #8
An old VIFF tradition is revived in this electrifying anthology of new indie animation from Japan–with a special bonus in the form of Hwang Gyuil’s Deaf and Wind from Korea. A wide range of graphic styles and techniques, tackling everything from a ninja vendetta to the secret origin of the universe. The full listing is on VIFF’s website. –Tony Rayns

GYRO (Jairo)
Makoda  (Japan, 6 min)
Saturday, September 27, 6:30pm, International Village #8
Sun. September 28, 1:45pm, International Village #8
A reggae-rhythmed feminist protest against men who idle while women do all the work. Featuring a woman whose face has been erased and a man who rules with his nose. Award for Excellence, Image Forum Festival 2014. – Tony Rayns

WAITER
Yamada Ryoji (Japan, 9 min)
Saturday, September 27, 6:30pm, International Village #8Sun.
September 28, 1:45pm, International Village #8
A seriously weird animation which plays on two meanings of “wait”: “wait on (someone)” and “to wait (for something).” Yamada himself says “it might be a criticism of nuclear power.”  Award for Excellence, Image Forum Festival 2014. – Tony Rayns