THE RESIDENT OF VANCOUVER: KAZUHIRO SHIBATA 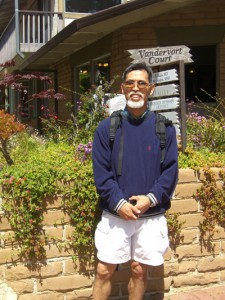 Personal history
Kazuhiro Shibata was born in early spring of 1954 as the second son of the Shibatas, who made a living by farming and fishing. He has an elder brother, a younger brother and a younger sister. The place he was born is called Oomagoshi of Iwasaki village in Aomori prefecture. It is more or less a quiet, peaceful place, then and now.

At that time, there was no dental technician school in the region. Kazuhiro moved to Tokyo and enrolled in the 3-year dental technician program of the department of dentistry in Nihon University. Those were busy days. He worked during the daytime and took courses during the evening. He started working right after he completed the program, and decided to further his education after a couple of years at Tsurumi University.

When he was 23 years old, he went for another lone-man-cycling tour, this time a complete circuit tour of Japan. He started at Cape Soya at the North end of Hokkaido and finished at Cape Sata at the South end of Kagoshima prefecture.

In this tour, Kazuhiro had attempted to break the existing public record of 10 days and a few hours. He could not break the record and ended up extending his journey to Okinawa, the most southern prefecture of Japan. This became a great experience for him overall.

Motive for immigration
Kazuhiro had a relative who had immigrated to Brazil, which brought about his own interest in immigration. One day after work, he visited the International Immigration Agency in Tokyo and asked about the prospects of immigration to Brazil. One of the officers explained to him that there was an extremely slim chance for a medical professional to be able to find work in Brazil, as they were currently only asking for general labourers.

“However,” The officer said,“If you are interested in other countries, both Australia and Canada are accepting medical professionals from foreign countries.”
Kazuhiro immigrated to Canada as a young man of 26.

10 years later, Kazuhiro met Anna, who emigrated from Poland. They married that same year during which he also started up his own laboratory. Mr. And Mrs Shibata are both in the medical field – Mrs. Shibata is a nurse practitioner. They currently have a son who is in university.

The happiest moment
“When the well-known adventurer Naomi Uemura published the book The Arctic Circle, the publishing company invited readers to send comments. I was extremely impressed by the book, so I mailed my comments to a well-known Nihon TV Station. What do you know – they gave me a call later and invited me as one of the studio guests. I went to the studio as one of the 15 guests who have been invited. It was such an exciting experience being in the same room as Mr. Uemura. He seemed like such a genuine, honest, and humble man. He had no air of arrogance despite being such a celebrity.

“I have one more delightful incident. When the Science Council and the Contest of International Dental Technique were held in Kyoto in 1988, I sent my dental product from Canada. There was no response for four months until I received a package from Japan one day. I opened it and found a certificate of commendation and two award plaques. At that moment, I learned that I was nominated as a winner of Crown Bridge category. I was so thrilled that my skill was approved on an international stage.”

The saddest moment
“It was when my warm-hearted father passed away.  He was 79 years old at the time. He was a generous man and I remember him giving away fish he caught from time to time to his neighbours for free. Naturally, our home income was rather diminished most of the time, but we got by. My mother grumbled a lot that my father was too generous, but seemed happy that she picked such a man for her partner.”

The most unforgettable person or incident
“His name is Mr.Tamoto, my Judo instructor. He is a Japanese Canadian who embodies both Canadian and Japanese virtues. Including judo, I have come to learn many things from him.”

The most embarrassing incident
“When I was 24 or 25, I went to Nagano Prefecture for my friend’s wedding, wearing a brand new suit. Near the end of the ceremony, a stranger tapped my shoulder. I turned around to face a young lady. I tried to disguise a grin, thinking that I had caught a girl’s eye for looking very dashing in my new suit. The next moment, the lady said, “Sir, a fitting string is exposed on your back.”

Favorite book and music
Kazuhiro’s favorite book is My Spiritual Journey by the Dalai Lama, who incidentally is his favorite author. His favourite song is My Way.

Dream or hope
“I’d like to maintain my good health and continue serving the community with volunteer activities.”

Favorite word or creed
“There is no eraser to erase your regrets,” “Be true to yourself.”

Kazuhiro and I first met in 1981, the year following his immigration to Canada. We met through the Japanese New Immigrants Association, which does not exist anymore. Back then, they used to put on a play every year for Powell Street Festival. Kazuhiro was a newcomer at that time and had come through the introduction of Mr. Tasuo Kage (who happens to be the guest of this Column for February 2012). He participated through the years of 1981 and 1982, mainly doing supportive roles. I remember him as a hard-working man who was a pleasure to work with. We did not actually encounter each other until January of this year, as we bumped into each other at an event held at Nikkei Centre.

Kazuhiro’s Tohoku district accent stimulates a sense of closeness to the listener. Like Mrs. Fuku Kinoshita (who is this column’s guest last month), he is a genuine, pure- hearted person. Incidentally, they are close friends, which I did not know until very recently. I suppose is not surprising because they both seem to share identical sense of values. Perhaps they instinctively felt each other’s presence beyond time and distance and were drawn to each other as friends.

Once the interview was over and the guest had left, I sat alone in the empty room for a while to gather my thoughts. As I was skimming through some of the conversation, I realized that Kazuhiro’s positive remarks about his idol adventurer Uemura are also characteristics of Kazuhiro himself – genuine, honest, humble, and no air of arrogance. It was a pleasure to have worked with him during the short few years in the eighties, and I am delighted that fate brought us back together for this interview today.

Rick Akitaya writes a regular column in Japanese for the Geppo.