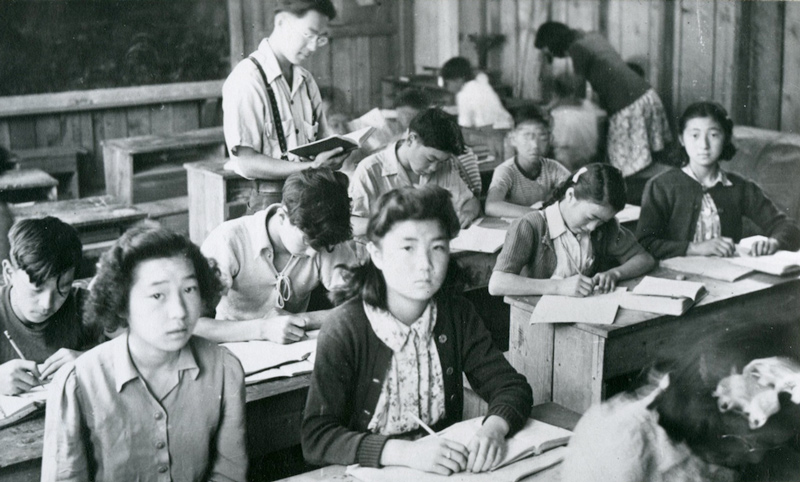 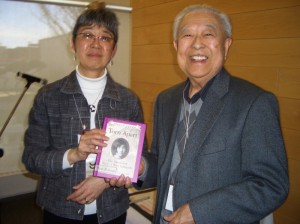 In the last issue, I described my new-found appreciation of my Japanese heritage and how the publication of Torn Apart, my first book, has set me on a journey of discovery. This is the continuation of that story.

Torn Apart was officially released in February of 2012. I sat down in late November and realized what an amazing year I’d had as a result. Not only did I travel to some memorable places in Canada, but I met some remarkable people I may never have encountered otherwise. In the talks I’ve given since my book came out, I repeatedly state that history isn’t just what happened in the past, it’s what we choose to remember of the past. By writing and speaking about the evacuation, internment and dispersal of Japanese Canadians during WWII in my book, history has literally come to life for me.

The first time this happened was at Toronto’s Japanese Canadian Cultural Centre in March of last year. I’d been invited to participate in a conference called Keisho: Passing the Legacy of the Japanese-Canadian Dispersal to Future Generations. Hakujin friends of my mother Molly Aihoshi (née Iwasaki) had warmly received my debut presentation at her local senior centre. But I had not yet spoken in front of a nikkei audience and in the setting of the JCCC’s Heritage Hall, I was nervous. I had a good turnout for my session of the conference, and was asked many perceptive questions at the end of my talk. My biggest surprise came afterwards. While I was signing books a distinguished-looking man brought me his copy, open to the back pages containing historical photographs. He pointed to the one on page 203 of volunteer teacher Hideo Hiraki in his classroom, and said, “That’s me.” I was astonished, never dreaming I’d actually meet someone who had only been historical research until that day! Stan, as Hideo is known, asked to have his photo taken with me, but it really was my honour to be in a photograph with him.

Because Torn Apart was published in the 70th-anniversary year of the uprooting of our community from British Columbia, the timing was perfect for a spring book tour to Vancouver and the Lower Mainland. On May 24, 2012, I read at Historic Joy Kogawa House in Vancouver’s Marpole neighbourhood. It was a privilege to find myself in the author’s childhood home where passages of her ground-breaking novel Obasan were set. Although I’d read the book years ago, I’ve never forgotten how wartime propaganda extended even to children when Naomi plays the board game Yellow Peril. Earlier I had tried, without success, to track down a photograph of the game to use in my book. As we approached press deadline, my editor warned me that we might have to substitute a different image. Then at the eleventh hour, a friend put me in touch with Ann-Marie Metten, executive director of Kogawa House. Ann-Marie kindly advised me that the game, along with other family artifacts, were in the collection at the Galt Museum in Lethbridge, Alberta, donated by Joy herself. Lethbridge is the large city nearest to Coaldale, where Joy’s family lived after leaving BC. I was able to obtain a photograph from the museum quickly and, soon after, Ann-Marie invited me to speak at Kogawa House. 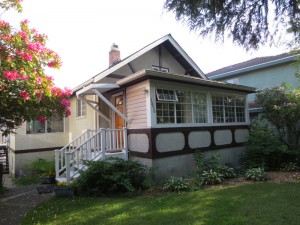 As I entered the modest home that is so significant to Japanese Canadians and to Canadians generally, I was cordially welcomed by both Ann-Marie and Tamsin Baker of TLC, The Land Conservancy of British Columbia, the non-profit society that owns and administers the site. I visited the famed cherry tree in the yard, diseased and ailing yet revived and regenerated through grafted saplings that are planted around the city, including at Vancouver City Hall. Inside Historic Joy Kogawa House, the small living room where the reading took place was starting to fill with guests, young and old. I began my presentation before an enthusiastic audience. Near the end of my talk as I was showing a photo of 1943 New Denver volunteer teachers, an older nikkei woman raised her hand. “Is that Alice Aihoshi in the front row on the left?” she asked. When I replied that it was, the woman declared that she too had been a teacher in New Denver. Furthermore, she had even taken over my aunt Alice’s class when she left BC to go east! Everyone gasped in surprise. Our guest introduced herself as Sue Miyamoto (née Hamade), who I also knew had been my uncle Alfred Iwasaki’s favourite teacher. To the audience’s delight, Mrs. Miyamoto shared some of her recollections of those years in the Orchard, including her wedding there. With her that evening was her daughter Wendy Yoshida, who was born in the internment camp. The stories of these two people provided a memorable conclusion to what had already been a notable day for me. But more insights were still to come.

On Vancouver Island, the village of Cumberland was once a thriving coal-mining centre where immigrants sought work. At one time Cumberland had the fifth largest settlement of Chinese Canadians in the province, as well as being home to a sizable community of Japanese Canadians and a small group of black families. Prior to my research, I had little knowledge of this unique place. But last spring I made my first floatplane excursion from downtown Vancouver to Comox harbour on Vancouver Island. Evelyn Gillespie, the energetic owner of Courtenay’s excellent independent bookstore, Laughing Oyster Books, had arranged for me to visit nearby Cumberland Elementary School. Children’s book authors tend to go to larger centres like Victoria or Nanaimo, so much to my surprise here I was treated like a celebrity. My presentation was well received, thanks to the teachers who prepared their students ahead of time by reading my book in class. 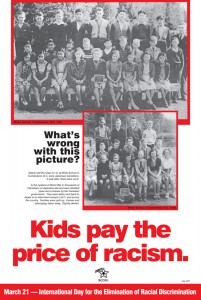 Afterwards, Evelyn had also arranged a visit to the Cumberland Museum and other relevant sites. Our historical tour was led by museum volunteer Flo Bell, long-time resident and a fountain of knowledge about the Cumberland Japanese community. When we arrived at the museum, Flo showed us a remarkable anti-racism poster produced for the British Columbia Government and Service Employees’ Union in 2000. The poster features two photographs, the first being Flo’s 1941 class at Cumberland’s Minto School. More than 70 years later, Flo could identify each of her Japanese schoolmates and pronounce their names correctly without hesitation! The second photo bears the large caption, “What’s wrong with this picture?” and shows the greatly reduced 1942 class with the Japanese students gone after the forced evacuation of their families.

Flo then took us through the museum’s Japanese gallery, featuring artifacts and fascinating photographs. These photos from the Hayashi studio taken by men who lived there provide an invaluable glimpse into everyday life of the Japanese. Regrettably, several of the studio’s glass-plate negatives were stolen after the evacuation and used to construct greenhouses! After that sobering visit, we drove to Japantown, where families of Cumberland’s Number 1 mine had lived and worked. Apart from one near-derelict shack down the road, none of the original homes exist today. The main site is vacant except for thirty-one cherry trees planted in 2009 for each of the families who lived there from 1893 until 1942. Funding for the trees came from an endowment fund of the National Association of Japanese Canadians, as well as former residents and their families. A commemorative plaque stands facing Number 1 mine’s abandoned slagheap, where Flo recalled children playing baseball in the adjacent open area. She also informed me that many former residents now live at the Momiji retirement home in Toronto.

My Cumberland tour ended poignantly at the Japanese cemetery, east of the village in a beautiful setting under tall fir trees with the mountains visible in the distance. As we approached, I was struck by the unusual circular array of the tombstones in the cemetery’s centre. Flo explained how anti-Japanese feelings were running high after Pearl Harbor and the atrocities committed by the Japanese in Hong Kong and Singapore. As a result, vandals came and hurled the gravestones over the nearby embankment. Later, when volunteers attempted to restore the cemetery, it was impossible to match the stones with the graves to which they belonged. I keenly felt the sorrow of that separation as we stood in silence beneath the trees. Like myself, Flo could not read the Japanese script on most of the stones but she could and did read those written in English. Gesturing to one, she recalled how her childhood friend’s father was killed in a Royston lumber mill accident. At another stone, she related that she still kept in touch with members of that family.
As we were about to depart, Flo pointed to one last significant landmark, a low, flattened peak along the distant mountain range. She informed me that it was once called “Jap Mountain.” I flinched at hearing that racist term. But Flo went on to say that, thanks to the sustained efforts of concerned citizens, the landmark had been renamed “Nikkei Mountain” in 2002. I left the village with a new understanding of its history, far beyond anything I’d read in books or websites. 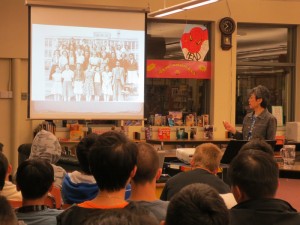 When describing history coming to life, I must mention a visit to Vancouver’s Templeton Secondary School, my mother’s former junior high school and the same school my fictional character Mary Kobayashi attends. After hearing about my mother’s Templeton adventures since I was a child, it was incredible to arrive at the front door of that storied building and then to walk in those same hallways as my mother did when she was young. I was warmly greeted by teacher-librarian Giovanna Bombino, who had meticulously put together a comprehensive display of books by and about Japanese Canadians. She also had created a “Meet Susan Aihoshi” billboard, featuring the April 2012 issue of The Bulletin with my mother’s Grade 8 Templeton class photo on the cover. As I stood in front of close to 50 English and Social Studies students with their teachers, I marvelled at the amazing path I’d taken to be here. I knew my mother was very proud of me that day.

My west coast tour officially ended in Steveston, once the heart of the Japanese fishing and boat-building community. My presentation was given in the historic Murakami Boathouse, located in the restored Britannia Heritage Shipyard. Several friends and family members were present that day, including my uncle Alfred Iwasaki and his daughter Karen. My uncle’s wife Lucie (née Takagaki) had grown up literally a stone’s throw away. A sign in front of the nearby Japanese Duplex building displayed a historic photograph pointing out the Takagaki store, run by my aunt’s grandmother. According to the caption, children would visit the shop to trade lead weights that fell from the fishing nets for bottles of Whistle soda pop. A strong sense of family history pervaded my entire Steveston reading. 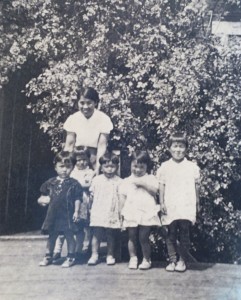 Afterwards, guests were encouraged to visit Murakami House next door, the former home of boat-builder Otokichi Murakami and his wife Asayo. Mrs. Murakami was filmmaker Linda Ohama’s grandmother and featured in the documentary Obachan’s Garden. While touring the house my cousin Karen pointed out a black and white photograph of Mrs. Murakami and the five Takagaki children. Karen said that her mother was certainly one of the kids in the picture but we were unable to determine which one! But that hardly mattered. Here I was visiting a historic building and seeing one of my own family members, my dear aunt Lucie as a child, in a period photograph! Once again, history had come to life in ways I’d never imagined and which I shall never forget.

I experienced more of the same when I attended the momentous ceremony for nikkei graduates receiving long overdue honorary degrees from UBC. However, stay tuned, because to tell that story properly I will need to do it in another issue.