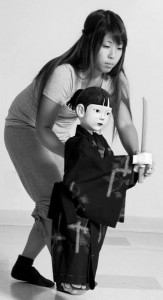 When Shizuka Kai was a little girl, she’d pretend that her stuffed animals could talk to her — and oh, the conversations they had! Today, the multi-talented actor, set designer, and graduate of Studio 58 has parlayed that youthful sense of play into puppetry.

And few series in the city are as playful as Brief Encounters. Ten fearless artists are thrown together into five inspired pairings and given two weeks to create some remarkable. For Brief Encounters 21 (which runs May 8-10 at Gastown’s Guilt & Co), Shizuka — who builds her own Muppet-style puppets from scratch —collaborates with celebrated slam poet Floyd VB.

Below, Shizuka dishes on her background, her artistic passions, and her state of mind as she heads into the Brief Encounters process.

Tell me about your artistic passions.
I’ve been doing theatre for a long time now. I learned a lot about acting at theatre school in Japan, and I also went to Studio 58 and did their acting program, but then I switched over to do production halfway through. That’s where I started to learn about puppeteering. My first experience with puppets was in school, when a friend of mine asked me to be part of a puppet show. She made a big fat ballerina puppet, and I loved bringing it to life. When I graduated Studio 58, I had a choice of doing a solo show where you act and create and do everything for it, and I did one with Muppet-style puppets.

When I was younger, there were two things that I really wanted to happen. I remember making miniatures, and I wanted to make miniatures for a living. I didn’t think that job existed, but now I do that for set design. I also wanted my stuffed animals to talk, and to see them come to life.

Puppet work is a little bit harder to come by than set design, and I’ve been doing a lot of set design. As a set designer, I’ve been going from company to company, but this year I’ve been doing more puppet stuff, too. I did a Japanese adapted production of Medea with YAYOI Theatre Movement. The children in the story are murdered, and in our version, the children were represented by puppets. I operated one of the puppets.

How would you define your style of puppetry?
It’s evolving. Right now my focus is the Muppet style of puppets where you use one hand to make it talk, and with the other hand you’re holding a rod that’s connected to the puppet’s hand.

What did you say when you were first asked to participate in Brief Encounters?
When they asked me, I knew what it was about and I was pretty stoked. I said yes right away.

What are you hoping to get out of the Brief Encounters process?
I’m in for the experience and the fun of it. It’s exciting to create stuff.

Is there anything that you’re dreading about the process??
I’m dreading the time constraints. In meeting with my partner, we both have pretty busy schedules over the next two weeks. I’m dreading that we won’t accomplish as much as we want to.

Tell me about your Brief Encounters collaborator. Without giving too much away, what can Brief Encounters 21 audiences expect from this collaboration?
Floyd VB is really awesome and we’re both pumped about these ideas we’ve talked about it. It was funny meeting Floyd because I felt it was like a blind date.