REVIEW: School Days With A Pig 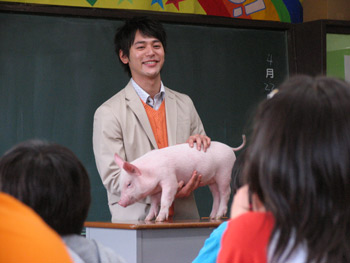 Within two minutes of the opening credits of School Days With A Pig, one can pretty much forecast the upcoming conflict, which essentially boils down to this universal quandary: how does one raise an animal, care for it, and then kill it for food? Because it is filmed in a documentary style, one forgives the lack of dramatic tension. Instead, the movie relies on the audience’s ability to empathize with the characters and their dilemma, and in this it succeeds admirably.
The film begins with Mr. Hoshi, a young and energetic grade 6 teacher (played with sweet earnestness by Satoshi Tsumabuki), bringing a piglet to school. The goal, he explains to the school administration, is to raise the pig throughout the school year and then eat it at the end, in the process teaching the students the connection between life and food. Despite some misgivings, the Principal (Mieko Harada, who plays a small but significant role in the film), gives her OK to the experiment.

Before you can say “this little piggy went to town”, the students have named their new classmate P-chan, built her a pen in the schoolyard and are up to their elbows in pig poo. They also begin to forge a bond with P-chan that can bring nothing but heartache in the end.

Somehow, the fact that one can see the inevitable crisis coming a mile away doesn’t take away from the either the charm or the emotional core of the film. This is due in no small part to both the young cast, who are uniformly excellent, and the director (Tetsu Maeda), who manages the trick of taking a true story, fictionalizing it, and having it come across as a (mostly) true story. While stretches of the film are clearly being played out for the benefit of the camera, others—specifically the scenes played out in the classroom—have the ring of authenticity, which in the end is its greatest strength.

In several key scenes, the students debate P-chan’s fate, and it is here that the heart and soul of the film resides. Watching the debate rage across the desks while the handheld camera tries to keep pace, conflicting emotions come into play for the viewer. On one hand it seems unfair to place such a weighty decision in the hands of grade six schoolchildren. On the other, one can’t help but feel that this is a truly authentic education that the students are receiving, as far from the dull world of textbooks and worksheets as one can possibly get. If the experiment treads a fine ethical line, the payoff is in the response of the children. They take their challenge and responsibility seriously—both in terms of raising the pig and deciding its fate.

Before long, the class is divided into two sides: those who can’t contemplate killing, let alone eating P-chan, and those who argue that they should stick to the original plan. As one boy says, “She’s our friend, but when we started to raise her, the promise was to eat her. I think we should keep that promise and eat her for her sake.”

Where the film succeeds best is drawing us into the world of the children, and seeing this life and death scenario through their eyes. The adults quickly become secondary, and indeed, the principal deflects the concerns of parents and other staff members, asking them to trust the students and their teacher, who himself keeps to the periphery as much as possible.

As the school year draws to a close and a decision must be made, the stakes grow higher and it is hard not to get drawn into the increasingly emotional debate. The decision comes down to giving P-chan to a grade three class that has offered to adopt the pig for the coming year (which some students argue means passing the responsibility to their younger, less capable students) or sending her to the slaughterhouse.

Tears are shed as the students wrestle with the notion of playing God. All of them, no matter what side of the debate they stand on, have come to care deeply for their adopted friend, and it is heart-wrenching to see them take the weight of the decision on their slender shoulders. When one girl asks, “Mr. Hoshi, who decides the length of life?” the issues of both mortality and morality are brought to bear with the kind of directness that only a child can summon forth. The concept of responsibility is brought up again and again by both sides of the debate. As one boy says, “Since we began raising her, we should be seeing her through to the end of her life.”

School Days With A Pig is based on a controversial event that took place in Osaka, Japan in 1990. While it is difficult to know how close the film stays to the original story, it’s really not all that important in the end. The film is not without its flaws, occasionally slipping into the maudlin sentimentality and cutesiness that the Japanese have perfected, but is succeeds on most counts, and I’d recommend it to both families and educators, or indeed anyone who has ever struggled with the kinds of issues raised in the film.

When I Grow Up
Director: Toshimi Ono
Canada, 2009, 10 min
This documentary is a portrait of Jan Walls, who teaches the Chinese language and performs the kuai ban shu / bamboo clappertale.
April 16, 9:30am
Roundhouse Community Centre

for a full listing of films and showtimes,
visit www.r2rfestival.org