Nisei Hockey Pioneer Learned the Game in BC 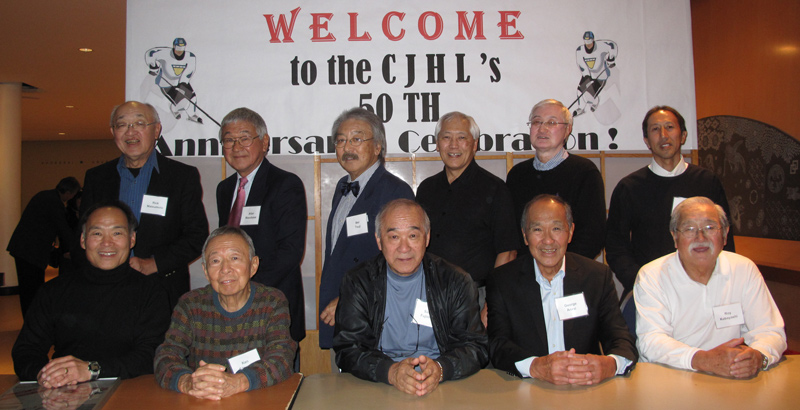 George is shown with 50th anniversary organizing committee in front row 2nd from right. His close friend and former team-mate, Roy Kobayashi, is sitting to his left.

Part II in a series on early Nisei hockey in BC

When I opened the plastic bag, there was a cardboard picture frame that had browned from age and was fraying at the edges.

It contained a 10X8 black and white photograph of a hockey team – that was obvious. But when I looked at the photo caption, it was a surprising discovery. There in the back row, at the far right, was a Japanese Canadian player. 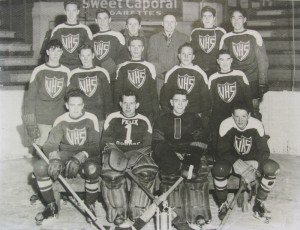 The date on the caption was 1948 and the name of the team was Vernon High School. It had won the first provincial high school hockey championship of British Columbia and there was George Anzai – just three years after the end of the Second World War.

What was he doing there, I thought? Why was an 18-year-old kid playing hockey in BC, a province long-known for its prejudice against Japanese Canadians, who had just been released from those infamous internment camps for the sole reason they looked like the enemy.

I decided to find out because I was researching hockey in the JC community as part of the 50th anniversary celebration of the Canadian Japanese Hockey League that was to be held in Toronto on Sept 22, 2011.

Because of George’s experience, I decided to expand the scope of the anniversary to include Nisei players like George who came before us. It was to be called “A Celebration of Hockey.”

Like many Nisei, George downplays his pioneering career. He thinks it was just happenstance.

“Our family never went to a “ghost town” such as Lemon Creek, Tashme or Slocan, but to smaller towns such as Chase, Tappen and Lavington, which was about 10 miles from Vernon.” he said. “While I was in Tappen, I attended grade 9 in Salmon Arm and boarded with a hakujin (white) family who had a hockey-playing son. That’s where I started to play hockey.”

After finishing grade 8 in Tappen, George says his family had to move to Lavington for secondary school, but the only school available to him was out of town. “We were bussed daily to Vernon high school at which time I played hockey for the school and won the championship,” he said.

At the time, George didn’t realize he was a trailblazer. “While I was attending Vernon high school, no other Japanese played hockey. Perhaps they were too busy brushing up on their scholastic skills,” he joked.

Despite the fact internment had ended just three years before in 1945, George says there were no negatives to his hockey experience. “There was no resentment whatsoever that I knew of while I was playing hockey in B.C.,” he says. “I don’t think any of my team-mates had any discrimination against me.”

Most JCs didn’t have any contact with hockey in the Vancouver or Southern BC Areas, since the weather was too warm for winter sports such as ice skating and hockey.

But George says he had the advantage of living in the interior part of the province, where colder weather produced frozen ponds and rinks. “All the major cities had artificial ice, but the smaller towns relied on mother nature for their rinks,” he said. As a result, he says many towns and cities in the interior, such as Salmon, Armstrong, Enderby, Kelowna and Vernon, had high school teams. 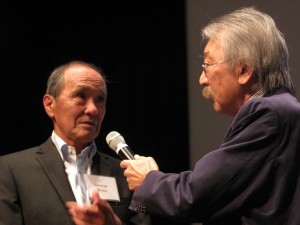 While he remembers hockey developing as a winter sport in the area, he says the sport was hindered by the lack of hockey equipment. “We used to order some of our equipment through the Eaton’s catalogue, which had to come all the way from Toronto back in those days,” he said. “I can’t remember how much I paid for skates, but I don’t believe the sticks were more than $2 and here I am today paying $40-$50 for a composite stick for my 10-year-old grandson!”

After high school, George says he went on to play Jr A in Vernon, but by 1951 his family had decided to move east to Toronto and just because of hockey he was glad.

“When I was in BC, I used to read about the Japanese hockey league in Toronto in the New Canadian (newspaper). So when I arrived in Toronto in the fall of 1951, I got involved with the Nisei Flyers and played many enjoyable years with them.”

As it turned out, George, together with his close friend and former team-mate, Roy Kobayashi, were part of the early hockey history that started in BC but developed in Toronto.

This turned out to be the unexpected big story. For example, I discovered there was another NHL (Nisei Hockey League) before ours. It started on the outdoor rinks of downtown Toronto at around 1948, moved indoors to the warmer environment of Varsity Arena for 1950-51 then disbanded around the mid-1950s. This was the league that George Anzai was reading about in the New Canadian.

The impetus to this early NHL came even earlier. A group of hockey-playing nisei from the Greenwood internment camp got together in Toronto for impromptu shinny between 1947 and 1948 and they’re the players who eventually organized the early NHL with teams called the Bums.

George Anzai wasn’t part of this early hockey in Toronto. He was winning a championship as an 18-year-old in Vernon, BC. But John Onizuka, whom The Bulletin profiled last issue, was one of the Greenwood players who came east with their families and started playing hockey on Toronto outdoor rinks.

This is how the 50th anniversary of Toronto’s CJHL turned into a bigger celebration. It was, in reality, the 70th anniversary, just because of pioneering Nisei like John Onizuka and George Anzai.

George and his new-found friend in Toronto, Roy Kobayashi, went on from the Nisei Flyers to become part of Double S. Tile, a team made up of the best JC players who went on to capture the East Toronto Senior Hockey championship in 1956 – 57.

Just how good that league was can be found in this unfortunate Canadian hockey footnote. In 1954, the East York Lyndhursts came out of the same league to represent Canada at the World Hockey Championships. They lost to the Russians.