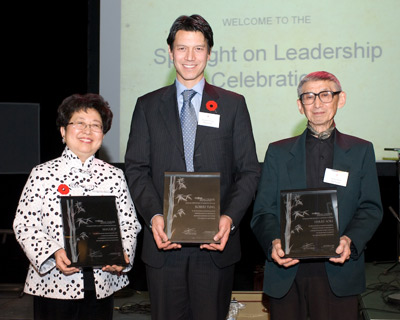 Harry Aoki, 87 years old and still going strong, was one of the three honourees from the Vancouver Asian community chosen for the North American Association of Asian Professionals (“NAAAP”) Vancouver Venture 2008 Spotlight on Leadership Celebration, held at the CBC building November 5, 2008. The other two were Maggie Ip, co-founder of SUCCESS and a former Vancouver City Council member; and Robert Fung, real estate developer and advocate for heritage and sustainability. They were each asked to offer their advice to the up-and-coming generation and to answer questions from the audience.

As Harry told the audience, The BC Security Commission wouldn’t let him keep his violin when they interned him because it didn’t fit in his suitcase. The only instrument he could keep was the harmonica but it was surprisingly useful to his musical career. He used it as a performance instrument in a concert with a classical ensemble and won instant acclaim. To show his continuing devotion to the harmonica, he played Stardust as part of his presentation (see photo).

Harry has had stints at the CBC on TV and radio, and was music director for a Commonwealth Games held in Edmonton. He has a wide range of contacts in the music world in all genres. He invited to the session Themba Tana, a drummer from South Africa, who gave the audience a 90-second sample of what Harry reported as having been identified by ethno-musicologists as “the first music”of our species, played on a hunting bow.

The music history/geography lesson was typical of Harry’s broad range of interests and of the type of musical experience he provides at his First Friday Forum sessions at the Nikkei Centre on the first Friday of every month.

NAAAP Vancouver, a pan-Asian group of younger professionals, held the event to recognize those in the Vancouver Asian community who had made great contributions and who serve as role models for the community. Nine other Spotlight on Leadership Nominees were recognized. In the business/ professional category were Anna Fung, James Ho and Yuen Pau Woo. In the arts, culture and media category were Joyce Lam, Karin Lee and Roy Miki, and in the community service category were Raymond Louie, Indira Prahst and Severn Cullis-Suzuki.