“Kodoku”: the life and art of Kimiko Koyanagi 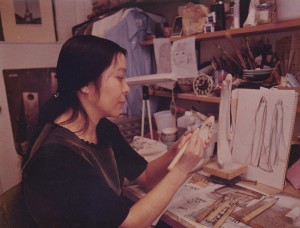 Kimiko Muraoka Koyanagi is a third-generation member of the Muraoka family of doll-makers. She immigrated to Canada forty-eight years ago, and has produced a distinguished body of work that features solitary, elongated, female figures. They’re made in the traditional way – a painstaking process in which she mixes finely-ground wood shavings (originally, paulownia), with paste and rice paper, then carves and sands the hardened medium. The figures are coated with a blend of sea-shell paste and watercolour. Critical to Koyanagi’s project is conveying the message that traditional doll-making is fast becoming “a lost art.” In Japan, the skills and knowledge of techniques are disappearing. In Canada, her work is esteemed among a discerning segment of the general public.

From conversations with the artist in her home in Burlington, Ontario, 2012

Our neighbourhood in Tokyo was Shitamachi, working class, near Arakawa river. Father was a third generation glass blower. His father was a poet and a judge for poetry contests, as well as a glassblower.

I grew up in the family business, helping to make doll’s heads – something I was allowed to do. I was the fifth of eight children. I loved to help. War changed everything. Bombing of Tokyo began. Every night there were sirens, B29s, and bombs.

March 2, 1943. From an upper-floor window in the girl’s school, we were watching American and Japanese planes in the sky. We were children. The airplanes were fighting and my class-mates were cheering. Suddenly, a bomb blasted a big hole in the school courtyard. I fell to the floor. When I got up my legs were shaking. After that, my father sent me to Chiba to join the family. I knew if I stayed in Tokyo, the next year I would have to make bullets on the second floor like the older girls. In grade six, we had practiced crawling on the ground with bamboo sticks and sneaking up on enemy. We learned how to kill American soldiers with bamboo sticks!

Even in Chiba, when we were on the shore looking for crayfish, U.S. planes returning from daily bombing missions in the next prefecture, Ibaraki, fired machine guns on the bay… putta! putta! putta!

On March 9, Tokyo was fire-bombed. Wind spread fire. From Chiba, I could see west side of river. Tokyo sky was all red. Twenty, thirty thousand people died. After that, for two or three years, the whole family was in Chiba. We rented a small garden, grew rice and vegetables. We were very poor. No doll-making. So I studied art by myself.

The family business was very successful. Even my younger sisters helped. We were young but they depended on us children.  I loved doing the smallest thing. Everyone helped each other. I never thought it was unfair. It was a close Japanese family. It was natural.

When I started to create my own things, I remember meeting Kyosuke Kindaichi, a famous man who had published a kanji-to-English dictionary. In it, “doll” is “a toy”.  He looked at my exhibition invitation-card and he said, “You want me to look at dolls?” And he did not come.  It made me think of questions: ‘What is a doll? What do I want my dolls to express?’ It depends on expectations of ‘what is a doll?’

My style is unusual. When a doll-writer once came to see me, he was surprised that I was only twenty, because my early, tall dolls were ‘surrealistic’. My brother told him, “She looks young but when she is working, she is like a man. She has strength and technique.” I was interested in Giacometti – his drawing is so deep. And I admired Modigliani, Munch, Rodin. I was absorbed in art, morning to night. I always went to galleries, skipped lunch to go. My friends were painters, printmakers, poets. I didn’t have doll-crafter friends. My brothers were up-to-date, aware of art scene, took me to gatherings, exhibitions. Their friends were kabuki actors, poets, and painters.

I married Jim Koyanagi, a Japanese-Canadian architect who was living in Japan, in 1962. We lived in Tokyo and then Guam for two years. And we spent our savings travelling in Europe for one year, visiting galleries, churches, seeing architecture. We came to Canada in 1966.

When I left the family business my oldest brother said the family had “lost an arm.”

However, the Muraoka family business was successful and famous in Japan.

When I show my work in Tokyo, many have never seen this type of doll. Some appreciate and buy. They call from Japan to order and wait for them. Several years ago on the Ginza, I sold a dozen and accepted orders for three, which I completed at home and sent.

But now dolls are mass-produced in molds in China. All the traditional processes are skipped. The cost is cheap, and even famous doll-stores sell both traditional dolls and cheap imitations. Today is like that. People value other things – they like to travel for example. People live in small houses. They don’t collect.

Doll-making is a special process. The materials have to be made by the artist. The process starts by mixing wood shavings, glue and cotton fibre, to create a simple elongated form which becomes the body of the doll. Little details, concentrated. Too much detail crowds out emotion. Soft or heavy lines, directions – just one or two centimetres difference in angle can change the mood.

Pigments are made with seashell powder, animal gelatin. Pigment recipes are almost scientific and affected by climate. In Japan’s rainy season it’s wet, in summer it’s hot and humid. In winter, it’s dry. So it’s very difficult to control. And basically two kinds — thick and thin powder — using strong and less strong glue depending on the season. Check weight, soak overnight, cook, and blend. One pigment takes three days to make. Then it can be refrigerated but it’s usable only for two weeks.

Only Japan has this kind of tradition. But even in Japan, it is not being continued. If I die, no one can make the pigment and the tradition will die. The apprentice system is almost gone. Five years living in teacher’s house. First year, watch, learn. Second year, apprentice can touch the doll.

If I wasn’t born into a doll-making house, life would have been freer. And coming to live in a different environment made life limited. English, raising family, home-making. I grew up as a craftsperson, artist. I had to find a new identity as a new immigrant. Acceptance of loneliness, sadness, hope, anger — these things are transferred into my work. This is not widely perceived.

Why are the dolls so slender, tall? My feeling is that long line is sometimes very tense.

Loneliness, solitude may be constant, forever – even with family, parents, brothers, friends. ”Kodoku” means that a person comes into this life alone, and dies alone. This is not sad. I love life. Every minute of living I enjoy. But every day we are aware that human life will end.