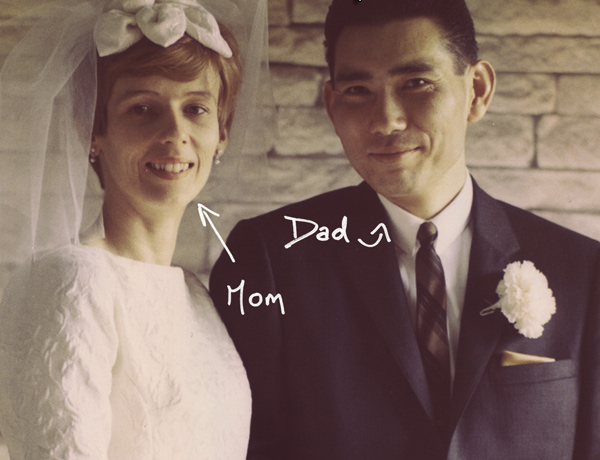 Hapa Subjects Wanted
Toronto Filmmaker needs hapa subjects to interview for documentary about growing up half-Japanese in Canada. If you are interested, please contact Karen Suzuki at suzukikaren@hotmail.com. Shooting will take place at the National Nikkei Heritage Centre in BC in early October.
The Bulletin, September, 2002

Ten years ago Karen Suzuki arrived in BC armed with a video camera, a microphone, and a working title for a documentary about identity, ‘Not Asian Enough’. A small ad in The Bulletin had generated a healthy number of responses and ICAS TV had arranged for her to use their studio at the National Nikkei Heritage Centre to conduct the interviews.

The idea for the film was based out of a need to explore and define her own identity. Born in London, Ontario to a Japanese Canadian father and a mother of German descent, Suzuki recalls always feeling different. In a 2002 interview in The Bulletin she remembers telling a kindergarten or grade 1 classmate that she was half Chinese or Japanese. She wasn’t sure which. As she said at the time, “As a child my ethnicity was more of a novelty than an identity.”

In advance of a small screening at the Nikkei Centre, Suzuki talked to The Bulletin, catching up on the past ten years.

So I last talked to you . . . gee, how many years ago was that?
I found the issue of The Bulletin that you last interviewed me for and it was December 2002. It’s been a long time! Almost ten years exactly.

You were in the process of making a film at the time. And now it’s finished! Tell me a bit about it . . .
The finished documentary is called Hapa-ness: A Canadian Experience. It explores multiculturalism and Japanese Canadian identity from the Hapa point of view. When I started it in 2002, I never imagined what a huge and challenging undertaking it would turn out to be. It took me almost eight years to complete.

It all started when I interviewed my grandparents. From that amazing experience, I wanted to come to BC to see where they had lived and where they were interned. While in BC, I interviewed some Hapas including you. I was fascinated by our common experiences, but at the same time each interview was so unique. I felt like the ugly duckling finding my swan family. When I returned to Toronto, I decided to look for Ontario Hapas to interview. After those interviews, I had over 30 hours of footage and no idea what to do with it.

I began to spend every Sunday that I could at a friend’s house who had an editing suite. It was VERY slow going. I had to learn how to use the software and figure out a method to distill all the great stuff that I had and somehow string it all together. By 2005 it became clear that the film needed a backbone and some action because it was all ‘talking heads’. So I returned to my Grandparents’ house with a cameraman (my now husband) to film my Grandmother teaching my parents and me how to make sushi.

I never once thought to give up on finishing this documentary even though it was such a challenge and the technology I used is practically obsolete now. I always felt like Hapas had something important to say and I wanted it to be heard. So it’s FINALLY done and I hope people like it.

You’ll be screening your film on November 6 at the Nikkei Centre but you’re really in town with another of your films at the Vancouver Asian Film Festival. Tell me about this film.
Everybody Wing Chun Tonight is a short kung fu drama about how martial arts can empower women. It’s also a love letter to the specific art that I’ve practiced for over a decade called Wing Chun, which was created by a woman. I’ve wanted to make this film for a long time, but felt I had to wait until “Hapa-ness” was done before shifting my focus. I was so excited when all the pieces fell into place and I ended up with a great team of very talented people that made the film possible. It was a dream come true.

Beyond these two films, what else have you been up to?
After I had shot everything for the documentary and had a rough cut together I found a job working as a Production and Office Coordinator for a small documentary production company. I worked there for almost five years on documentaries about multiculturalism and young global activists. It was a great experience and I learned a great deal. I left the company to go on maternity leave.

What are you upcoming plans?
My current challenge is finding a balance between motherhood and my career and creative pursuits. I have a number of projects in development. I don’t consider myself to be just a filmmaker, I tell stories that are important to me and allow the story to determine the best way it should be told whether that be through film, theatre, animation or just audio. I really enjoy radio documentaries. The intimacy of telling a story with no visuals is challenging and cost effective too. So far I’ve funded my own work, but I can’t afford to do that now. So navigating funding opportunities and finding ways of creating without spending money are big focuses now. And it all has to happen while my son is napping.

So here it is ten years later, you have a film about being hapa and you now have a little hapa of your own. Do you think making the film gave you a greater insight into what it means to be mixed-race, and does it influence how you raise your own child?
Making the documentary definitely gave me an insight into my own mixed-race identity through connecting me to the Japanese Canadian Community and meeting and relating to other Hapas. But the greatest gift the film gave me was footage of my grandparents and the memories they shared with me. Sadly, they both passed away shortly after my son was born so he didn’t get a chance to meet them, so it will be up to me to share their stories with him and the film will become a part of that I’m sure. But, since he has a European last name and his Japanese features are so subtle, I don’t think that he’ll identify with his Japanese roots day to day. And growing up in downtown Toronto, he’s surrounded by so many cultures and other mixed kids that I’m not sure he’ll feel very unique. We’re raising him using a combination of how we were raised with a twist of our urban, artistic lifestyle. I’m not sure that it has anything to do with my mixed race identity. But he does love sushi though.