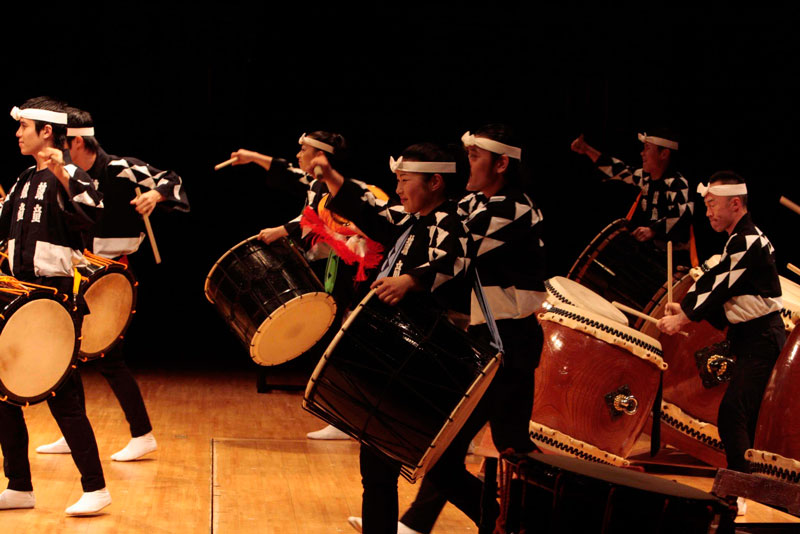 For any performing group to stay in existence for thirty years or more—much less thrive—there has to be a solid foundation in place. Groups like the Rolling Stones and the Alvin Ailey Dance Company come to mind, their longevity based on fusing raw talent with a clear vision, enabling them to survive the initial blast of success to endure for decades. Whether you call it a formula or a recipe for success, it needs the right ingredients to succeed.

For Japanese drumming ensemble Kodo, who appeared at the Queen Elizabeth Theatre on January 28 as part of its ongoing One World Tour, that recipe is grounded in the traditional folk arts of Japan, with a focus on the huge taiko drums that go back to antiquity but continue to resonate today. In a world that has changed greatly over the past thirty years, the ensemble’s aims are both humble and ambitious: to “cultivate a unique aesthetic and sensitivity, reaching out toward a new world culture rooted in the rich possibilities of a peaceful coexistence between humanity and nature.”

That aesthetic was on display at the Vancouver show, where the group presented their trademark vitality and commitment for almost two hours before a nearly full house.

Taiko is no longer rare and exotic, as it was when the group first burst onto the world music scene. There are now numerous groups, both amateur and professional, throughout Japan and the rest of the world (including eight in Greater Vancouver alone), each with their own approach. That said, Kodo remains the gold standard to which other groups are compared, and it is always a treat to see them live.

Given the unrelenting physicality needed to play the taiko as Kodo does, plus the rigours of touring, it is inevitable that older members have given way to younger ones on stage. In this sense Kodo is more closely aligned with Alvin Ailey than the Rolling Stones, for which we can probably thankful. This edition of the One Earth Tour sees a new generation of drummers taking up the bachi (drum sticks).  The seven men and three women who appeared in Vancouver all looked to be in their early to mid twenties and their endurance was impressive.

The group performed ten pieces over the course of the evening including several new compositions. The opening number, Sakaki, featured a solo dancer dressed in a Shinto priest-inspired costume. Accompanied by several drummers, his stylized movements could have been invoking the taiko gods to look down favourably on the Vancouver audience. If that’s the case, he was successful. The piece led seamlessly into another new work, Stride, which featured the entire ensemble in an energetic, movement-filled piece that set the tone for the rest of the evening.

Like any group with a long history, Kodo has its signature works, and both halves of the programme concluded with pieces have been in its repertoire from the beginning.

Monochrome, by Japanese composer Maki Ishii, was originally written for Kodo’s precursor Onedekoza. It is a groundbreaking piece that evokes nature in its use of texture and dynamics—moving from a mere whisper to a roar over the course of a dozen minutes. If practice makes perfect, then thousands of performances have honed this work to perfection. The piece has lost none of its power over the years and despite a baby who decided it was time to make fuss during the piece’s extended quiet section and a rogue cell phone, it kept the audience in rapt attention.

One thing that has changed over the years is the inclusion of female drummers in the group. Initially women were relegated to support roles, primarily as dancers, something that always appeared rather regressive, particularly in North America where female taiko players tend to outnumber men by a fairly wide margin. Although the bigger drum parts were still played by men this time around, the three women of Kodo proved themselves as adept as the men at the smaller drums. The third piece in the programme, Chonlima, which has appeared in the set list sporadically over the years, featured the three women plus one man passing a series of lightening fast rhythms up and down a line of drums and drew a huge ovation from the audience.

The concert ended with two other long-time staples of the Kodo repertoire, O-daiko and Yatai-bayashi. For long-time Kodo fans, it was strange not to see the seemingly ageless Yoshikazu Fujimoto up on the big wooden cart pounding away at the huge O-daiko for fifteen minutes before leaping down to play the hira-daiko in a semi-prone position for another ten minutes. If the group has played 3,300 shows since its inception, he must have played at least 3,000 of them. Still, his stand-in not only played the part with élan, but put his own stamp on the pieces.

My own experience of any given Kodo concert will forever be coloured by the few days I spent at their home on Sado Island in the early eighties. As a fledgling taiko player I had travelled to Japan with other members of the newly-formed Katari Taiko to experience the birthplace of taiko and visit as many taiko groups as we could. The biggest thrill was being able to watch Kodo rehearse—sitting mere feet away on the polished wooden floor as they pounded the huge drums for hours at a time. It left my ears ringing and my enthusiasm for taiko stronger than ever. There was a focus and discipline in their rehearsals that North American groups lacked but there was also a sense of playfulness and fun that belied the stereotype of Japanese as soulless automatons.

Both the discipline and the playfulness were on display the other night and it’s a winning combination.

An interesting sidenote: there is a BC connection in this edition of Kodo. One of the newer members, Eri Uchida, came to Canada as a high school student as part of an international ESL programme and lived for a while in Kelowna, where she helped form Yamabiko Taiko.