IN REMEMBRANCE OF VICTIMS OF ATOMIC BOMB

MIYAKAWA SENSEI CHANTS FOR PEACE ‘MAY PEACE PREVAIL IN OUR WORLD’ 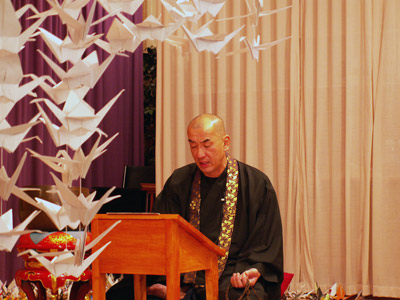 Sensei Yasuhiro Miyakawa, Resident Minister of the BC Interior Jodo Shinshu Buddhist Temples (Kamloops, Kelowna, Vernon), held a 12-hour Continuous Chanting Marathon at the Kamloops Jodo Shinshu Buddhist Temple on August 6, 2008, to commemorate the tragic loss of life that resulted from the Atomic Bombing of Hiroshima on that date, 63 years ago and also the victims of Nagasaki three days later.

Surrounded by thousands of tiny paper cranes, Miyakawa Sensei sat cross-legged on a pillow on the hardwood floor for 12 hours and chanted the Pure Land sutras (The Larger Sutra, The Contemplation Sutra, The Amida Sutra, and Shoshinge) in English. He remained in that deeply devotional position from 6 am to 6 pm, without breaks, water, nor food during that time, while chanting the sutras. He was joined in the chanting by some members of the Kamloops, Kelowna, and Vernon Temples from time to time throughout the day. He was able to read through the Sutras two and a half times during the twelve hours.

Over 15,000 paper cranes, made by temple members, decorated the temple and served as a symbol of peace.

The public were invited to attend and chant with Sensei, strike the bell, offer incense, fold a paper crane as a symbol of peace, or watch a video on the Hiroshima bombing. Over 50 participants came and went throughout the day, some to watch, others to participate in the chanting. A most successful event.