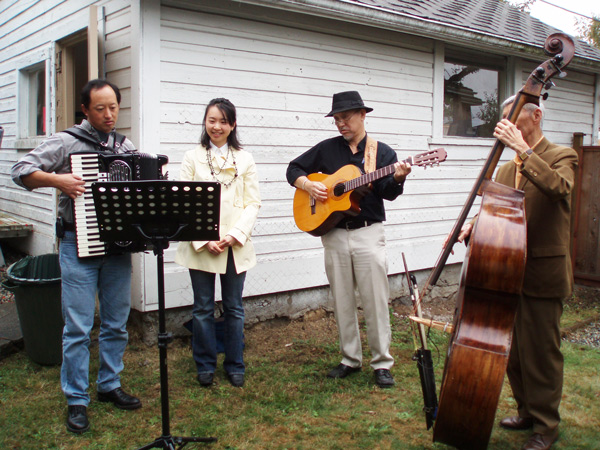 Harry Aoki was a teacher and a model for my life in so many ways that I don’t know where to begin. In this issue dedicated to Harry, I’d like to focus on what little I know about his music-related activities. About how much he promoted understanding between different cultures through countless musical exchanges and how many musicians of numerous nationalities at all levels of expertise he must have helped out over the decades by putting them in touch with other musicians just right for them. Personally, he also helped me deepen my understanding of jazz and improve execution on my guitar.

Since I got to know Harry a few years after we moved here from Singapore back in 1997, he put me in touch with several other musicians who continue to inspire me, as well as professionals in other areas. What I remember him most for is the “FFF (First Friday Forum)” evening gatherings that used to take place in the spacious reception hall of the then newly-built Nikkei Heritage Centre every month.

The best sessions must have been from around 2000 to 2005 or so when Harry was still in good health and had the energy to plan and execute the programs as he wished with the help of assistants who were happy to volunteer, I’m sure, inspired by Harry’s personality and work. Up to 70 or 80 people would show up to hear multi-cultural performances in classics and jazz, Canadian and Celtic folk music, Japanese (including Okinawan) folk and traditional music, Chinese, Indian and Indonesian folk music and African percussive music. These are just the genres I can readily recall.

There were many others.

Both as a member of the audience and an occasional performer on the guitar, I remember how enjoyable and stimulating the monthly FFFs were as, I assume, do many of you readers. Particularly memorable were the brief talks Harry would give on the importance of cross-cultural exchanges. He was particularly keen on preserving the culture of the First Nations people.

One of Harry’s most memorable experiences, he told me, had been the time he met Larry Adler, the greatest classical harmonica player of the time, in Los Angeles back in the 1960s, when Harry was there to perform with him.?Afterwards, he heard Adler calling someone on the telephone. He overheard him saying excitedly something like “…and this Japanese guy can even play such-and-such (a very difficult piece).” Then Adler was asked to bring Harry over as the man, who also played the chromatic harmonica, wanted to meet and play with him. So Harry did and it turned out that the man was none other than Jascha Heifetz, one of the greatest classical violinists of the 20th century.

Harry’s approach to music, and maybe even life, could be characterized by the jazz slang for his instrument, the “upright,” meaning vertical bass. One valuable advice he gave me was also a slice of his philosophy. “Even if you are playing simple stuff (i.e. melodies, “licks,” riffs), execute it cleanly and you will sound that much better.” We all want to do fancy, showy stuff, but make sure first that you can play the simple stuff properly, was the way I, ever grateful, took it.

Harry took up the bass while he was working in Prince George after World War II but before Japanese Canadians were allowed to return to Vancouver in 1949. A Calgary Philharmonic concert master had told him a bass player would never be out of work. But who was his inspiration? A few weeks before he passed away, Harry said during a video recording session with some of us that it had been Jimmy Blanton, a young innovator who joined Duke Ellington’s band in 1939 but played for only two years before succumbing to tuberculosis at age 24. He is credited with being the originator of pizzicato solos and walking bass lines that subsequently became the norm. When he was young, Harry used to spend many hours listening to Ellington records with his dad Sadayoshi, a big fan of the Duke’s.

Harry once told CBC that it was his first experience with racism during WWII relocation and internment that had motivated him. “Music is one of the first places where racism breaks down…..You can just sit there, relax and listen. The color of the person (i.e. listener or performer) doesn’t matter.” Over his career spanning some 60 years, he entertained radio and TV audiences all over North America and beyond and thousands of live audiences big and small. He also introduced probably thousands of musicians to other musicians, resulting in countless creative collaborations. Throughout, he showed all of us what cross cultural communication through music is all about.

During the aforementioned video recording session, Harry played haltingly on his harmonica, probably for the very last time, one of his favorite jazz standard tunes, Stardust, composed by Hoagy Carmichael. In years gone by, I did have the unique pleasure of accompanying Harry on that tune a few times. Unique because it was also a favorite of my father, an amateur pianist who passed away almost 20 years ago. Harry was like a big brother I never had in real life….and I mean “big” in many ways. Thank you. We’ll miss you Harry, and as the old jazz cliché goes, we’ll jam again up there one of those days.