Junko Tabei was born in Miharu, north of Tokyo, in 1939. A pioneering mountaineer and lover of peaks, she founded Japan’s “Ladies Climbing Club” in 1969.

Leading an all-women Japanese team, Tabei reached the summit of Everest on May 16, 1975, and eventually became the first woman in the world to climb the highest peak on each of the seven continents.

Tabei worked tirelessly to promote the importance of living a life connected to the natural world and to raise awareness regarding the degradation of Mount Everest.

In her later years and in spite of being diagnosed with cancer in 2012, Junko continued to climb and hike as often as possible, celebrating the 40th anniversary of her Everest success with a hiking trip to Tengboche, Nepal, in September 2015. She reached the summit of Japan’s Mount Fuji in July 2016, the last summit Junko reached. She passed away three months later, on October 20, 2016.

A book, Honouring High Places: The Mountain Life of Junko Tabei, by Junko Tabei and Helen Y. Rolfe based on translations from Japanese by Yumiko Hiraki and Rieko Holtved, is the first English-language book covering Tabei’s life and accomplishments.

On Wednesday, February 27, Helen Rolfe will give a presentation at the Vancouver International Mountain Film Festival focusing on the writing process of Honouring High Places. Mixed with readings, stories of recent travels to Japan to meet the Tabei family, and a slideshow, this presentation shares the human element of both the climber and the writer. 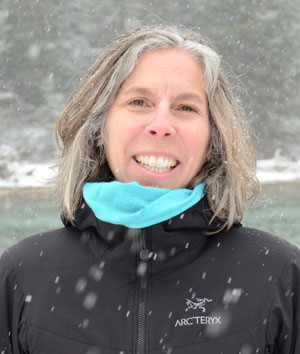 For Canadians who aren’t familiar with Junko Tabei’s story, maybe you could give a summary of her accomplishments.

Japan’s Junko Tabei was the first woman to climb Mount Everest (1975) and the Seven Summits (the highest peak on every continent), both significant events in mountaineering history. Raised in a strict Japanese culture, Tabei’s climbing feats broke the norm for women in her country and worldwide. Her role as a national hero after Everest enabled Tabei to be an influential spokesperson for mountain culture and the environment. She focused heavily on preserving natural places in Japan and abroad. When the 2011 Fukushima nuclear disaster struck, she facilitated climbs on Mount Fuji for the Japanese youth who suffered great loss of family; these organized climbs still occur today.

Fuelled by the love of exploring new places, Tabei shaped her entire life around climbing. She passed away in 2016 at age 77. Tabei felt that all summits were worthy of ascent, which led her to climb the highest peak in more than 73 countries.

How did you come to write this book?

I was asked by translator and Banff local Yumiko Hiraki to collaborate on this book. Yumiko is a friend of the Tabei family, and she considered Junko to be her mentor. It was Yumiko’s vision to have Junko’s mountaineering stories told in English. I am a writer and editor in mountain literature and mountain safety, and Yumiko contacted me in hopes that I would edit her translations of Junko’s previously published Japanese works. I said yes, but quickly realized that more than an edit was required. Once translated, the story of Junko’s life needed to be written in English from start to finish. My job was to piece together the translations, formulate a storyline and present Junko’s accomplishments in a story-telling manner, all the while remaining true to Junko’s voice.

I never had the chance to meet Junko Tabei in person. We exchanged letters and emails via Yumiko, but we never met. Sadly, Junko died when I was deep in the writing process of the book, at a point when she had already become a steady part of my everyday life.

Talk a bit about the process of stitching the book together.

Honouring High Places is based on translations of various excerpts from previously published Japanese books by Junko Tabei. Certain points of information were clarified via emailed and written letters of questions that I asked Yumiko to exchange with Junko, and later, after Junko died, with Masanobu Tabei (Junko’s husband) and Setsuko Kitamura (Junko’s close friend and Everest teammate). It was Yumiko and Junko who chose the excerpts we would base the book on, and me who pieced together the story around those excerpts. In the end, Yumiko and I spent countless hours reviewing every single word I wrote to ensure authenticity to Junko’s voice.

What was it about her story that spoke to you so strongly?

Junko’s clear-mindedness and clarity about the task at hand strongly spoke to me. I admired her certainty about situations, and her drive to get the job done. She always had her teammates’ back, yet was also a confident force to be reckoned with. I think I would have followed her anywhere in the mountains.

You travelled to Japan to meet Ms. Tabei’s family. Tell me a bit about that experience.

I travelled to Japan in April 2018, a few months after the book was published. For me, that trip was like completing a full circle, meeting Junko’s family and friends after having spent several years engrossed in Junko’s life. The Tabei family and friends were gracious, welcoming and warm. I was touched to have spent time with them. Masanobu was especially kind. We all enjoyed a meal together in Junko’s favourite Tokyo restaurant, one where she had planned many a Himalayan expedition in the past.

Earlier in that trip, I met up with Yumiko in Japan and we travelled to Junko’s childhood town, Miharu. We spent time there with a long-time friend of Junko’s, retracing her early steps in life.

Yumiko and I had to wipe a tear from our eyes when, low and behold, Honouring High Places was on display front and centre at the Miharu Public Library—it was the only English book in the place.

You’ll be appearing at the Vancouver International Mountain Film Festival on February 27. What will you be presenting there?

The evening’s presentation focuses on the writing process of Honouring High Places, the first English telling of Junko Tabei’s life. The production of this book was a unique experience that involved a triangle of overseas conversation between Junko Tabei, author Helen Rolfe and translator Yumiko Hiraki. Mixed with readings, stories of recent travels to Japan to meet the Tabei family, and a slideshow, this presentation shares the human element of both the climber and the writer.

To write the story of someone’s life is nothing short of a privilege, and to be asked to write about the exploits of the first woman to summit Everest is truly a gift. I recognize it as this, and I am grateful for the opportunity. To all the readers of Honouring High Places, arigatou gozaimasu.

The first time I met Junko Tabei was in August 2002, at a tiny pullout on the Trans-Canada Highway west of Golden. She was with her commercial tour group from Japan and I was a local hiking guide for them. She was sixty-two and I had been living in Banff for about thirteen years.

Guess how tense I was to wait for her van – with another guide (driver) and the group coming to meet me there – the “crazy” woman who not only survived the avalanche but, risen like a phoenix, pushed to scale Mount Everest after that. However, the petit lady who scurried from the van to approach me was pure friendly. She bowed so low, to almost my waist-height and said, “My name is Junko Tabei, yoroshiku-onegai-shimasu,” sort of “nice meeting you” in this case.

Panicking to bow lower than she did, I still managed to get out a fact-based social greeting, “I know you very well,” to which she replied sincerely, “Do you?” I couldn’t help giggling inside.

Like in this case, she was hilariously humble quite often. Although a colleague of mine had an impression of Tabei-san’s piercing eyes as unforgettable, if you see her somewhere without knowing her super-deeds on the mountains, she was just a cheerful regular woman.

So fortunately I was befriended by her, and not only had a few more chances to guide Tabei-san and her family in Canada, I enjoyed a wide range of activities with her, from “full course Japanese mountain passtimes–hiking and hot springs”, to women’s popular trip to Kyoto – include Kurama-yama, short (but steep) hiking and window shopping at Teramachi – to the incredible challenge on one of the world’s 8,000 meter mountains. Mt. Manaslu (we reached up to 7,000 meters due to bad weather and time limit, she was 66!),

The original idea for Honouring High Places came to me in 2014 when I got to know that Tabei-san had cancer. The reason was simple, no book on Junko Tabei existed in English back then and it was such a waste that her story, a mountaineering history, was accessible only for Japanese readers. I just thought it is necessary to make one.

It was very lucky that I, whose grades were low in university, as I was more into mountaineering and social-drinking, still had a natural interest in reading and writing to pursue this project. So I started running around to obtain permission (from Tabei-san) to look for a professional English writer/editor (I got Helen Rolfe!) and together with Helen to search a publisher (we got Rocky Mountain Books!). I collected the most important stories from Tabi-san’s numerous books already published over the years in Japan, edited first in Japanese then translated into very basic English, then Helen re-wrote the whole story in beautiful English.

In the total three years it took to make the book, to be honest today, I simultaneously learnt the how-to and common sense of the publishing industry. What a horror story to confess here!

But I just followed Junko Tabei’s adventurous mind. Her mantra to encourage people to do something new was “Oh, everybody has a ‘first time’ to challenge one’s comfort zone.”

That’s how she agreed on the spot when I proposed the English book project – “Yes, let’s do that!”

Now that we see this book on amazon.com, we tend to forget that she knew of my ability to guide hiking groups but had no clue how to produce a book. I am still positively shaken what a brave entrepreneur she herself was, just like when she called me to climb Manaslu when I had been only as high as 4000 meters before.

She wanted to come to the Banff Mountain Book and Film Festival once the book was out. Sadly, I had a hunch that wasn’t going going to happen. On October 20, 2016, it became true and she  passed away at the young age of seventy-seven. We were still writing the Annapurna chapter. I knew the day would come, but I was still too shocked even to cry.

My redemption for not having the completed book to show her is to help spread her story, be proud of Junko Tabei, my dear sensei-friend now cheering us all from the place higher than Mt. Everest.