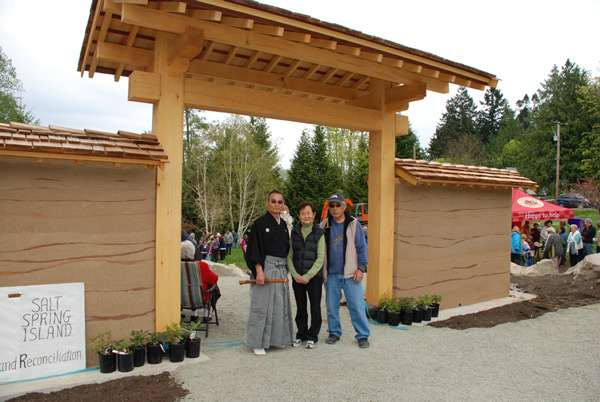 On May 2, 2009, a ceremony was held on Salt Spring Island to officially open the first phase of Heiwa Garden, a garden of unity and reconciliation. It began with the music of shakuhachi master Takeo Yamashiro who has become synonymous with events for the Garden. After the history was given of how the Japanese Garden Society was formed, a children’s choir from an elementary school sang a few songs and recited some haiku. The large crowd in attendance gave a loud round of approval as the ribbon at the gate was cut. A generous single donation of eighteen thousand dollars made it possible to build the beautiful gate. The yellow cedar used to construct the gate came from Bella Bella. On either side of the gate is a wall of rammed earth. The garden itself is beginning to take shape as huge rocks, trees and shrubs being placed according to the architect’s design. Design consultant Masa Ito was also in attendance. When it is completed, Heiwa Garden will be magnificent. It will indeed be a peaceful place where visitors will be able to read about the history of the Japanese Canadian community that once existed on Salt Spring Island and contributed so much to its wellbeing.

The Japanese Garden Society is made up of dedicated people who have worked tirelessly to make this garden possible. In order to complete Heiwa Garden, they are requesting donations for trees, shrubs and other expenses. Please go into their website, www.saltspringjapanesegarden.com and you will be able to get more information and see many photos. Your donations are tax deductable.