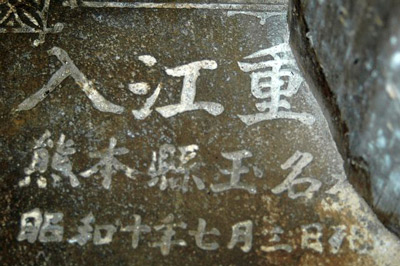 I received a phone call at the Kamloops Japanese Cultural Centre telling me that a large granite head stone was being used as a base for a pillar that held up the flooring for a house. Photos of it had been taken and the inscription was translated and sent to me. Part of the headstone is not readable as a hole was made to fit the support post. The basement floor is dirt. It was a head stone for Jugoro Iriye (Irie) deceased Showa Ju Nen (equivalent July 3, 1935). The person calling was wondering if his remains were buried below the stone. The house is in Union Bay on Vancouver Island.

Most of people who died in the Comox Valley are listed in a booklet that was compiled by a group of former residents of the area. Also, there is a Japanese cemetery in Cumberland where Japanese were interred after a funeral at the Royston Buddhist Temple. Jugoro Iriye is listed in the book with the date of death recorded as July 3, 1936. (This one year difference could be dependent on the date when the Showa era began). Due to the hole in the head stone, it is unlikely that Jugoro’s remains are buried beneath it. More likely, like the head stones of the Chemainus cemetery (it is rumored that a headstone is used as a center piece of a hearth, and corner stones in a rock garden), someone had taken the stone to use it for a different purpose.

According to the headstone, Jugoro immigrated from Kumamoto Prefecture. Other information gathered is that he was from Nabe Mura, Aza Nabe , Tamana Gun.

For twenty five years during and after the  war years, the Japanese cemetery in Cumberland was left unattended and it returned to it natural forest-like state. Also, there was  vandalism. In the 1960s, Sensei S. K. Ikuta who was the resident Sensei of the Vancouver Buddhist Temple, with the assistance of the Vancouver JCCA, had a service club in Comox Valley gather the scattered head stones and place them in a memorial monument. Pre-Second World War deceased in the Comox Valley totaled one hundred ninety eight. Only a small number of head stones are mounted in the monument.

As it is a head stone, the present owner of the home is willing to have the stone removed. (There will be some cost to remove it) There may be relatives of Jugoro still living in Canada or other people who wish to have the stone retrieved and put back where it belongs. There may be people who have information pertaining to the head stone or of Jugoro Iriye. Please telephone  Roy at 250.376.3506. fax 250.376.4204 or email rbinouye@telus.net