Tribute to an Important Nisei Pioneer 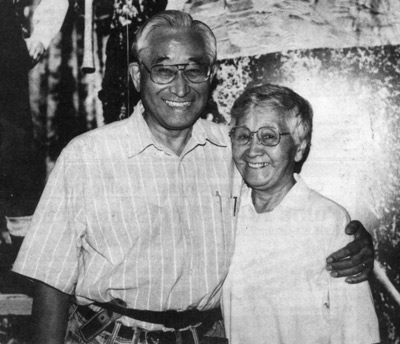 Misao Fujiwara (née Yoneyama), who passed away last month in Langley, BC, was a Vancouver-born prewar nisei whose professional and community achievements in Toronto deserve to be better known. As many know, Dr. Misao Fujiwara became an obstetrician/gynecologist in Toronto. And her husband Dr. Wesley Fujiwara, who predeceased her in 2000, was a pediatrician. And both became strong activists in the Japanese Canadian community.

(Although wife Betty and I were fortunate enough to get to know Misao and Wes, most of the details that follow came from the meticulously detailed An Evacuee’s Memoir, written by Misao’s brother Harold Yoneyama, published in 2008. Other sources include Japanese Canadian Redress: The Toronto Story, published in 2000.)

Misao Yoneyama was born in Vancouver on July 20, 1915, the oldest child of Rikizo and Yone (Kataoka) Yoneyama who immigrated to Canada from Kanagawa-ken.

Misao was followed by sisters Yachiyo in 1917 and Mitsue in 1920, and brother Harold in 1924. The latter two were born in Haney, BC where the Yoneyamas farmed until the 1942 mass expulsion from the BC coastal area.

In the enforced wartime move, the family decided to go to an Alberta farm near Edmonton because Misao and Yachiyo were studying at the University of Alberta. The other sister Mitsue was at the University of British Columbia and boarding with the Shimokura family in Vancouver. So she went with the Shimokuras to the Tashme family detention camp, the only Yoneyama to stay in British Columbia at the time.

In Edmonton, Misao got her medical degree in 1943 and moved to Toronto to serve her internship at Women’s College Hospital. Yachiyo got her dentistry degree the following year and became the resident dentist at the Lamont, Alta, hospital. Meanwhile Mitsue, left Tashme to join the family in Alberta and studied optometry in Edmonton.

Eventually, the entire family moved to Toronto where the three sisters opened practices in their specialities. And that was in an era when female doctors were unusual anywhere in the country.

Meanwhile, brother Harold got his Civil Engineering degree at the University of Toronto in 1951 and became an Ontario government civil servant. He quickly rose up the ranks and in 1968 became an executive director at the Department of Labour as head of the Safety and Technical Services Division. At that time, becoming an executive director meant that Harold Yoneyama was the highest-ranking Japanese Canadian in the provincial government service. He later moved to the Ministry of Consumer and Social Services as executive director of the Technical Standards Division.

So all four children of Rikizo and Yone Yoneyama became successful professionals, a proud achievement in that immediate postwar era when resettling into new lives was the goal of displaced Japanese Canadians.

Then in the 1980s, as campaigning for redress took hold of Nikkei in Canada, as it was doing in the US, Misao and Wes Fujiwara became actively involved in the Toronto campaign movement. And in the early years—like engineer Stan and dentist Marjorie Hiraki had done before them—the Fujiwaras opened their home to many meetings of those nisei and sansei attempting to steer the campaign for official apology and redress in the right direction.

As part of the strategy, because of a general disagreement with the so-called National JCCA redress committee, Wes Fujiwara organized the North York Chapter of the National Association of Japanese Canadians (NAJC). Its name came from the Toronto suburb where a large part of the JC community resided. Subsequently it became the Greater Toronto Chapter of the NAJC with Wes Fujiwara as president. And supporting him all the way was his doctor wife Misao.

Then in 1987, as the redress campaign was reaching its climax (although no one knew it at that time), Wes Fujiwara led the movement to create a new Japanese Canadian national newspaper that would give fairer reports of what was going on than the existing Canada Times and The New Canadian. Titled Nikkei Voice, it took form with Wes Fujiwara as publisher. He also purchased the computer systems which introduced the newly developed technology to the newspaper staff. Again, he could not have achieved that without Misao’s support.

And it has turned out that both the Greater Toronto NAJC Chapter and Nikkei Voice became successful projects which still carry on today.

In 1990s, Misao and Wes, having retired from their practices, moved back to Vancouver where their daughter Joan had her medical practice at Surrey. And naturally they became a part of the West Coast JC activities such as the development of the Japanese Canadian National Museum. Wes passed away in 2000. And now Misao has left us to join him.

We Japanese Canadians, young and old, have benefited a great deal from the forthright leadership and generous efforts of Misao and Wes Fujiwara. We were so fortunate to have them as part of us.

reprinted by permission The Nikkei Voice