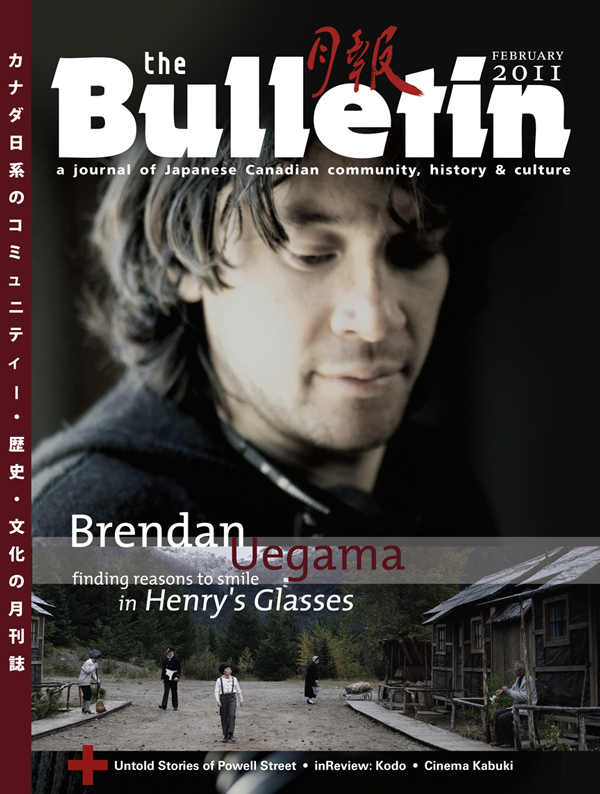 By any measure, we live in a world of plight. With recycled ideas and old formulas, we as filmmakers often continue to create cliches. In this loss of cinematic language, critical thought dissolves and mystery disappears. To stand out from this mold defines my success.

Growing up in Tsawwassen in the mid-nineties, Brendan Uegama was your typical skateboarding high school student, with little or no connection to his Japanese heritage beyond his own father, Walter, a nisei (his mother, Carol-Anne, is of mostly Irish ancestry). Brendan’s paternal grandparents, Imataro “Sam” and Kinoko Uegama, were from Kanagawa-ken; Imataro was 17 when he arrived in Canada around 1907. Interned in Greenwood during World War Two, the family relocated to Summerland where they ran an orchard.

While still in high school, Brendan developed a love for photography, entering the filmmaking program at Capilano College in North Vancouver and graduating in 2002.

Brendan’s affinity for visual imagery and his Japanese Canadian heritage merged when he started to ask questions about the internment, a subject his father had never talked about when he was younger. As he learned more about what his family and thousands of other Japanese Canadians had experienced during the war years, a film began to take shape in his mind.

He began to interview his relatives, and from those conversations and other research came Henry’s Glasses, a short film that looks at the relationship between a young boy and an old man in Tashme during the internment.
Based loosely on his family history, primarily his grandfather Imataro, and with Nicole Leier serving as co-producer, Henry’s Glasses was awarded a Kick Start Award by The Directors Guild of Canada.

Henry’s Glasses was filmed on location in what is now the Sunshine Valley, where Brendan and his crew recreated the Tashme internment camp with a careful eye for detail. The resulting film is lovely piece of work that doesn’t try to bite off more than it can chew, but instead captures a small moment of beauty in what was a difficult and trying time.

Brendan Uegama spoke to The Bulletin about the process of making Henry’s Glasses. 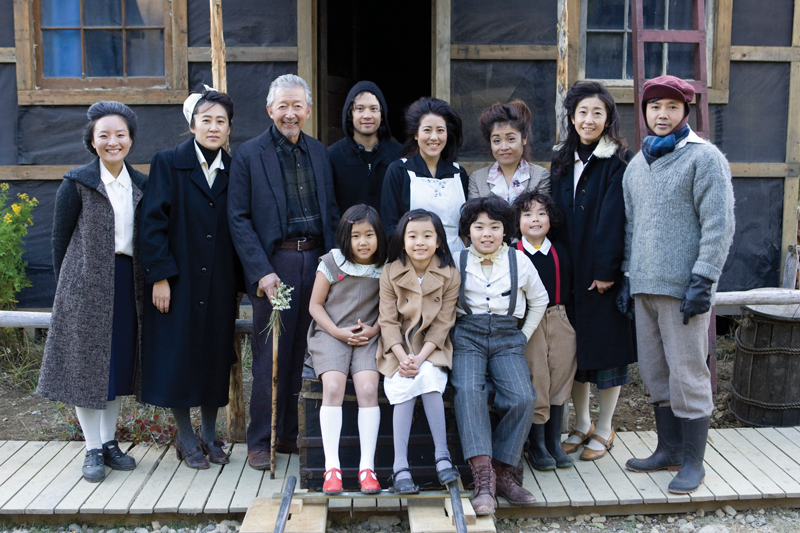 Like many Nikkei of your generation you grew up without much connection to your Japanese heritage. Was there something in particular that kindled your interest in your ethnicity and culture?
Yes – my father and his personal history. When I first learned about the internment it was a shock of course. I then started asking more questions about my family’s arrival to Canada and the history and experiences of the Japanese Canadians settling in our country. It was fascinating.

Henry’s Glasses is a small, intimate film in many ways, it doesn’t try to do or say too much. What gave you the idea for the film?
Self exploration and education. In high school, my social studies class skimmed over the internment in half of a period. It was no surprise that once I started telling people I was going to write about the internment, many knew nothing or very little about it. I started conducting some interviews with former internees and learned it was still a very difficult subject to express. I wanted to tell the story of the Japanese Canadians in internment, but I didn’t want it to upset those same people I wanted to honour. As well, I knew that pointing blame towards the government or anyone in particular would not satisfy me or doing anything positive. I wanted people to watch the film, be entertained and also be educated. After realizing all of that, somehow it seemed only right to tell the story through a young boy, an old man and a magical pair of glasses.

As well, I believe we must help educate people about the internment and what it means. I can’t express it more clearly than this quote: “It is a black mark on Canada, a country that prides itself on its ethnic diversity,  tolerance and its multicultural policies.  To study the internment of Japanese Canadians raises many questions about human nature, racism, discrimination, social responsibility and government accountability. Through the study of the internment, students will come to  understand that civil liberties can only be protected in a society that is open, and in a democracy where participation is expected.”

How did you manage to pull together this cast of Canadian Nikkei actors?
There is a tiny pool of Nikkei actors in BC! We wanted actors that could speak Japanese as well as English and that narrowed it down even further. We put casting calls on various websites, in papers and The Bulletin. Eventually we had on average of 20 actors per role to go through. All of them were easy to cast except the role of Mr. Yamamoto. So my father decided he would audition, just to see what happened. He did a brilliant job, to our surprise! We offered him the role, as long as he agreed to further study acting, prior to principle photography. He did, and he performed amazingly.

One thing that struck me about the film was the attention to detail—the sets and costumes really held everything together and gave it air of authenticity . . . when Henry comes running over the hill and you see the Tashme camp stretched out before him, I thought that was pretty powerful—we’ve seen the camps in old grainy photographs so many times and to see it in high definition colour was emotional in a strange kind of way. Did you actually create a reconstruction of Tashme in the Sunshine Valley?
Yes. We constructed six internment homes as basic shells from the outside and only one home with a fully functional and decorated interior. For the wide establishing shots of Tashme, the homes were filled in with Computer Generated Images.  The amazing part was, during construction we found up to 20 window frames with the glass still in them and 3 functional doors from the actual internment homes in Tashme. We built those into our homes and used as many artifacts as we could find. It was surprising how much we found.

It must have been something actually filming on location in the Sunshine Valley. How were you able to get permission to film there?
I first went to Sunshine Valley for research. I wanted to get a good look at the mountain range and the location of the sun, etc. I somehow got the email address of the owner of Sunshine Valley. I wrote him a long email, explaining who I was and what I was trying to accomplish. The owner, Kevin Harris, replied and asked me to come to his house for a meeting. After sitting with him for some time, he agreed to help us in any  way he could. He allowed up to use his workshops to construct our sets, take over an old Inn to sleep and house the crew, build the sets and film our movie there. We spent about three months living there throughout construction and filming! We could not have made the film the way we did without the support of Ryan and Melissa Ellen and owner Kevin Harris and his wife Audrey. They were very understanding and helpful.

You have a background as a cinematographer and it really showed in Henry’s Glasses. I thought the cinematography was quite beautiful and gave the film a lot of its character. Is it an advantage as director and writer to also be the one who is filming?
I don’t know if it’s an advantage or not, but it’s just right for me. Generally speaking, directors do not shoot their own films, but there are some. I’ve always been into photography and cinematography, so it wasn’t natural to step back from that part of the filmmaking process. After all, I dream in images.

Is this the first time you’ve stepped out from behind the lens to write and direct or have you done it before?
When I was in film school I directed a few small pieces, but nothing since then.

It’s a small film but it has a big feel . . . It must have taken a lot of people to pull it off. I don’t imagine the budget was very big—how did you manage to pull all these people together?
Passion. We had a crew of approximately 70 people while shooting. Our construction crew was between four and 10 for the two months leading up to the film. It was no easy task but the only reason people did it was because of passion. There were a lot of sacrifices made by everyone but it would not have been possible without the help of our Producer, Nicole Leier, and the entire crew.

At your age, you’re pretty far removed from the internment and what the Japanese Canadians went through. What did this film mean to you?
It meant everything. I put my life and soul into this film and I believe it brought me much closer to my heritage. I wanted to tell the story of the internment to help educate audiences. If people who don’t know of the internment watch the film and start to ask questions about it, then we did our job.

But more importantly, it’s what it means to the former internees. One day, when we were only a week away from shooting and deep into construction, a friend of ours from Sunshine Valley came into the workshop with a Japanese Canadian woman and her son and grandson. She had been interned in Tashme when she was between 12 – 16 years old. They were just visiting, and had no idea we were making a film on the internment. We took her to the set to show her what we had built and once she stepped out of the car, she started to cry. Can you imagine going back there 65 years later and walking down a roadway reconstruction of Tashme?

Later that night, we had them over for dinner. She grabbed my arm and told me she was happy we were making the film, and that she could see what we were trying to do was important. She gave me her blessing. That meant a lot to me, and I hope the film means a lot to her and other Issei and Nissei who experienced the internment.

Now that you’ve made this film do you have any plans to follow up with bigger projects along a similar theme or are you moving on to other subject matters?
I have two more projects I will make along this theme. We are in development of our feature documentary, The Rising Sun, that talks about the internment and the Japanese Canadian history. As well, a few more years down the road we are making a feature length film loosely based on Henry’s Glasses.

Do you have any advice for others who want to try their hand at filmmaking?
If you want it, do it. But you have to love it. It’s a tough business but if your heart is set, anything can happen.

Henry’s Glasses is available for purchase at:
www.blacktreepictures.com.
You can also send an email to request alternative payments
to info@blacktreepictures.com.
More information on Brendan Uegama can be found at
www.brendanuegama.com
and www.redvancouver.com.
Henry’s Glasses will be screened along with Linda Ohama’s Ishizue: fusion of the hearts, on Saturday, February 19 at 2pm at the National Nikkei Museum & Heritage Centre. There will be a question and answer session following the screenings. Suggested donation $5. Refreshments will be served.