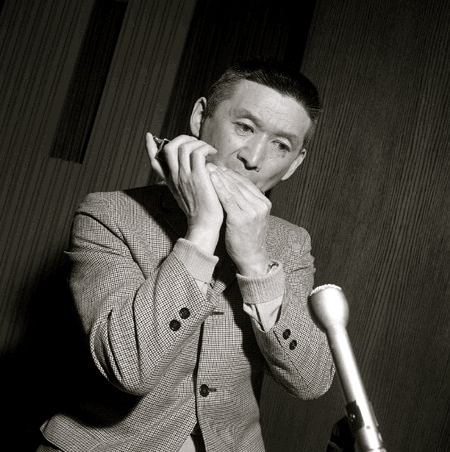 Harry Hiro-o Aoki is one of the most unique figures in Canadian culture. As a musician, scholar, and activist, he has devoted his life to using music to promote cross-cultural understanding. Born in Cumberland, BC in 1931, his early life was deeply affected by the racism he experienced as a Canadian of Japanese descent. As a young man, he largely taught himself to play the harmonica and upright bass while working in various places in British Columbia and Alberta. Despite this unconventional background, his virtuosic talents have been widely recognized. In the 1960s, he co-hosted a weekly CBC TV Network series Moods of Man that featured folk, jazz, blues, and classical music. In 1978, he was invited to coordinate the music at the opening ceremonies of the Commonwealth Games in Edmonton.

Years before the term “world music” became popular, Harry was pioneering the fusion of different musical cultures. Over the years, he has tirelessly worked to promote intercultural communication and understanding while mentoring younger musicians and artists. Now in his 79th year, he continues to perform widely and remains active in several community organizations. His recent honors include the Spotlight on Leadership award from the Vancouver chapter of the National Association of Asian American Professionals (2008) and the Coastal Jazz and Blues Society sponsored an evening with Harry as part of the 2008 Vancouver Jazz Festival.

In recognition of Harry’s unique contributions to Canadian multiculturalism, the Friends of Harry Aoki, in partnership with St. John’s College at the University of British Columbia, have decided to establish the Aoki Legacy Fund. The Fund will be used to further his vision for intercultural harmony by equipping a new generation of Canadian and global citizens for living in a multicultural world.

In July 2008, the Friends of Harry Aoki hosted a concert in his honour at the Firehall Arts Centre. This sold-out event brought many of Harry’s longtime collaborators and friends together to recognize his accomplishments and explore ways to further his legacy. After the concert, the organizers decided to turn the proceeds into a seed fund to be developed into a self-sustaining endowment in support of activities related to Harry’s vision. The Aoki Legacy Fund also honours the work of Harry’s brother, Ted, a Professor Emeritus of Education at UBC and a world-renowned scholar on multicultural education.

The Aoki Legacy Fund will be administered by a committee comprised of representatives from Friends of Harry Aoki, St. John’s College (SJC), and other community partners. It will be administered by St. John’s College and used to organize public activities at UBC. SJC is a residential college founded in 1998 by alumni from Shanghai’s St. John’s University. Between 1879-1952, St. John’s University was one of the Asia’s leading institutions of higher learning, a University renowned for its dedication to public service and integration of Eastern and Western cultures. As a community dedicated to international issues and cross-cultural exchange, it is now home to about 150 graduate students from over thirty countries representing a wide range of departments and research interests. SJC regularly holds workshops, concerts, lectures, and other events for the University community and general public. Over the last three years, Harry has been a regular guest at SJC, where he annually hosts a world music evening.
With Harry’s creative work in mind, we are especially interested in activities that encourage dialogue between artists, musicians, scholars, and members of the public. For example, we envision combining lectures with storytelling, or musical performances in conjunction with workshops for the general public. When fully established, the Fund will be used for a range of public programming, including:
•    concerts
•    workshops
•    lectures by noted thinkers on intercultural issues
•    authors readings
•    artist/scholar residencies

Next Steps
After a period of planning and preparation, the Friends of Harry Aoki are preparing to launch the Aoki Legacy Fund Campaign in Fall 2010. We are currently soliciting the support of community organizations and other interested persons in contributing to this Fund. The Fund will be formally launched in at a community dinner honouring Harry and Ted Aoki.

Come to Harry Aoki’s First Friday Forum, 7:30 on the First Friday of each month at Tonari Gumi, 511 East Broadway and enjoy an evening of music, discussion, friendship. Refreshments served. Admission is free although donations accepted to support the Aoki Legacy Fund, established through the Friends of Harry Aoki in partnership with St. Johns College, UBC. The Aoki Legacy Fund furthers Harry’s vision for intercultural harmony by equipping a new generation of Canadian and global citizens for living in a multicultural world.