A Justice In Her Time 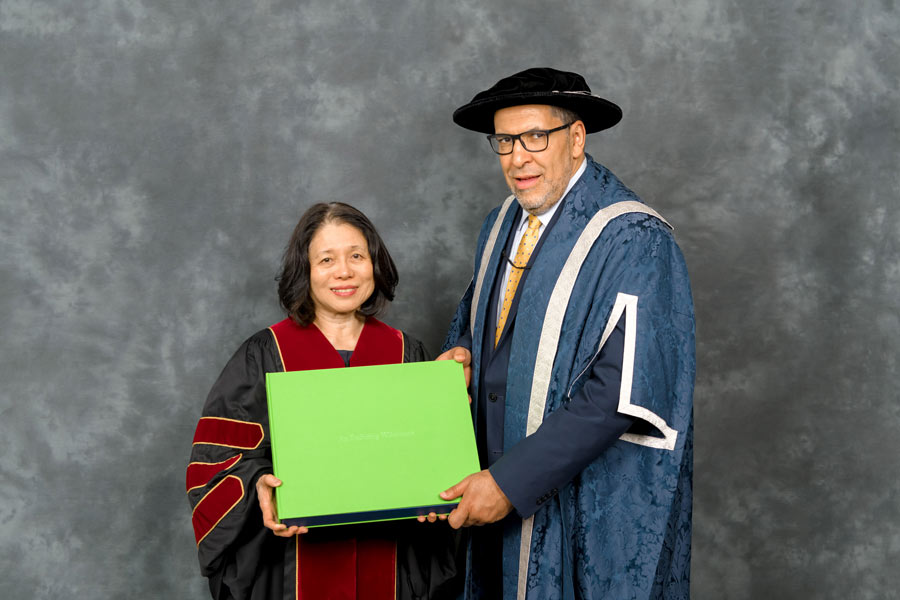 A Justice In Her Time, An Honorary Doctor Of Laws For Maryka Omatsu

“Ryerson bestows Honorary degrees to those who have made extraordinary contributions to society and in certain fields. Dr. Omatsu has made an extraordinary contribution to the Asian Canadian legal community, the advancement of Asian Canadian lawyers, and equity, diversity, and inclusion, and we are proud to celebrate her accomplishments and welcome her to the Ryerson family. “

– Julia Shin Doi, General Counsel and Secretary of the Board of Governors, Ryerson University

On October 16, 2019 Maryka Omatsu addressed over 2500 attendees at the Ryerson University fall convocation on receiving an Honorary Doctor of Laws. She stands as one of the enduring Japanese Canadian community’s supporters. While many of our “Redress champions” are no longer alive or have retired from activism, Maryka is working harder than ever for reconciliation and justice for Japanese Canadians.

Motivated by research which emerged since 1988 revealing the extent of the BC Government role in lobbying the Canadian government to enact racist legislation of forcible expulsion, dispossession and exile, Omatsu produced the award-winning video Swimming Upstream; Injustice Revealed which deconstructs the politics of injustice and the case for BC Redress. It’s a must-view, accessible at www.torontonajc.ca/swimmingupstream

Significantly, social justice icons Art Miki and Omatsu have reunited this year, generously serving as advisors and co-chairs of the NAJC’s project to compile recommendations for redressing historical wrongs against Japanese Canadians in BC. Those who have worked alongside Maryka Omatsu admire her dedication, work ethic and lifelong commitment to inclusion and justice. She is a consummate leader.

Justice Omatsu was on the NAJC Redress strategy team and served as NAJC legal counsel when the historic 1988 Redress Agreement and Apology was won. The importance of her role in the Redress campaign is one for the history books. Of this moment she has said “It was our community’s sweetest moment…a vindication against those who called us traitors, for our national shaming and exile during the war years, a reclaiming of sorts for our decades of discrimination, and the theft of our property and community.”

A member of the Order of Ontario and the first female Canadian judge of East-Asian descent, Omatsu is Co-founder of the Federation of Asian Canadian Lawyers and a founding member of the Sodan Kai, a group formed in 1983. The Sodan Kai (study group) played an important role in achieving a democratic voice for the Japanese Canadians. The Sodan Kai organized public discussions which helped establish that the majority of Japanese Canadians were in favour of individual compensation rather than a $5 million dollar group settlement supported by a smaller group. This important part of Redress history is lesser known but outlined in Japanese Canadian Redress: The Toronto Story, which will be made available by the Toronto NAJC in digital format in 2020. Maryka Omatsu wrote Bittersweet Passage: Redress & the Japanese Canadian Experience in 1992 which won the Prime Minister’s Award for Publishing and the Laura Jamieson Prize for the “best feminist book”.

For a life of public service to our community as an advocate, mentor and role model, Maryka Omatsu, we are indebted. Congratulations and thank you.

Maryka Omatsu Address to Over 2500 Attendees

I wish to acknowledge that we are on First Nations land. The survival of Canada ‘s aboriginal peoples, despite unrelenting efforts to obliterate their communities and cultures, proves it is possible to resist even the most draconian challenges.

Chancellor Fukakusa, President Lachemi, Provost Benarroch, Deans, Ryerson faculty, honored guests, representatives who join us on stage, proud parents, friends and especially the graduating class of 2019, I am pleased to address you today. Two values that have guided my life are to work for greater equity and diversity and to relate my work to the communities within which I have found myself. Because Ryerson singularly supports these two goals, it is very meaningful to me to receive this Honorary Doctorate degree.

Neither of my parents graduated from university. Please raise your hand, if you are like me, the first in your family to graduate from university? We are the lucky ones. We have had opportunities that our parents did not have.

I grew up in a poor family. A WWII Government policy dispossessed Japanese Canadians of all their property and possessions. My parents and grandparents lost everything they had spent two generations accumulating in British Columbia – our homes, businesses, a farm, and personal possessions. But we lost something even more precious. We lost our community and vital cultural facilities, including 59 Japanese language schools.

Confiscating all our worldly goods wasn’t enough. Racist government policies then pushed Japanese Canadians out of our home province of BC. This enforced deportation decimated my community. Today 60% of Japanese Canadians live outside BC. It is why I was born in Hamilton. Another result is that, like me, few of the 3rd – 5th generation speak Japanese. And, unlike most other ethnic communities, mine has an over 90% intermarriage rate.

How did all this affect my family? My parents most immediate, pressing goal was to climb out of poverty. Years later, when I told my father, whose chauvinist attitudes were all too typical of the men of his generation, that I was going to law school, he said, “Who would ever go to a woman lawyer?” However, when I became a lawyer, he was proud. Still, Dad worried I would not be able to support myself as a sole practitioner. He therefore applauded my decision to close my office and take a secure government job.

Later I returned to private practice to focus on human rights and environmental law. That was one of the most rewarding career decisions I have made. I was lucky. I had great clients and interesting work. 26 years ago, due to a movement to diversify the judiciary, I was appointed to the bench, becoming the first East Asian woman judge in Canada.

Class of 2019, you have the talents, education and good fortune that many in our society will never have. I know that you are excited as this chapter of your life closes. I know that many of you are apprehensive about what your future holds. You, your parents, and your grandparents are concerned about the world that you will be inheriting. Global issues such as climate change, over­ population, and revolutionary technological changes will dominate your lives.

When I sat in your seat over 40 years ago, things were both better and worse than they are today. What do I consider worse? From my perspective Canada was a white country. There was little place for me. In my high school of 2,000 you could count on one hand, the number of non-whites. At law school in the early 1970s, Susan Eng, a former chair of the Toronto Police Services Board, was the only other East Asian woman. For three years, professors and students alike confused us – although we were both East Asian, she was seven inches taller and had waist-length hair while mine was short.

What was good in those days was the economy. My generation had the luxury of not worrying about getting a job. Real estate was also affordable. My first house, in the west Annex on Palmerston Avenue, was $56,000. Today, it would likely cost almost $2 million. You will be living in a difficult economy. There are fewer full-time jobs, even fewer with health care benefits and pensions. Meanwhile, scientists predict that if we don’t change our carbon emissions dramatically, the quality of life that we enjoy today will be a thing of the past.

But I am excited by the youth and aboriginal people who are fearlessly speaking out. I think of them combating climate change, like 15-year-old Greta Thunberg. They are the hope for Canada and the world. I am impressed with the high schoolers in the US who advocate for gun control, the Hong Kong students who brave tear gas and truncheons to demonstrate for democracy, and the young folk in the First World who take over the streets to protest against the 1% who own almost everything.

Since high school, I have attended 3 ceremonies as a graduate. Truthfully, I cannot recall a word of what the illustrious speakers at these events said. I don’t expect you to remember what I say today either. Still, I urge you to dream big, to strive to make the world a better place and to take an active role in social issues. Yes, there will be bumps in the road you travel, but don’t fear failure.

Class of 2019 you give me hope for the survival of the species. You will need to redress the scourges of inequality – poverty, discrimination and homelessness. It will be your generation that will find the cure for cancer, who will save the planet from environmental destruction and make the world a more equitable place. On behalf of my generation, I apologize for leaving you such a mess to clean up.

My generation faced challenges, too. When I was a young lawyer, I joined other Japanese Canadians who began to demand an apology and redress from the Government for the mistreatment of our community. We faced pressure to remain silent. My mother cited a Japanese proverb to caution me: “the nail that sticks out is the one that gets hit.” Well we did not follow this advice and I convinced even my mom. Indeed, I have a photo of my mother marching on Parliament Hill in 1988, proudly holding a placard. In that struggle, Japanese Canadians found support from all segments of Canadian society. In a landmark decision, we won a Redress settlement of over $400M that restored honour to my community.

In closing, I hope that all of you will use your education not just for personal gain, important as this is, but also to advance worthy social goals. You will not stand alone; you will find allies amongst us.

I wish you all well.